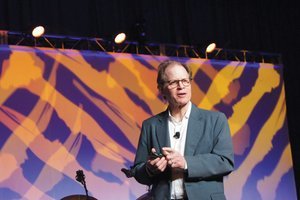 For much of modern human history, the way we’ve thought about the mind and brain reflects the top-down idea that physiological brain activity determines everything that goes on in what we call the mind. But scientists have learned over the past few decades that the human brain is only part of the much bigger story of what the mind is. In other words, the mind is much broader than the brain.

As I see it, “the science of consciousness” is the key to getting the mind to rise above the brain’s vulnerabilities, which—if not altered or modified—will probably destroy the planet. After all, the perspective of the mind as a product of the brain alone, or the self as only emerging from the skin-encased body, leads us to an isolating sense of inhabiting a “separate self,” which desensitizes us to our impact on each other and on the planet. It’s that narrow understanding of the self that fuels us-versus-them conflicts all around the world and propels us to treat the Earth like a trashcan. So it may well be that our very survival depends on the evolution of the human mind—and contributing to that shift in consciousness really needs to be a primary focus for our field from now on.

The key to this conception is to realize that the human mind is, in a very real sense, much bigger and more expansive than the skull that we imagine (in our wrongly limiting way) to house it. Specifically, relationships are the sharing between people of energy and information flow. The brain and its whole body are the embodied mechanism of that flow, and the mind is the self-organizing process that regulates that flow—and what you do with your mind can change the structure of your brain. When we move that structure toward integration, we’re cultivating well-being. One of the most powerful, science-supported methods for bringing about such neural integration is the practice of mindfulness.

Research has shown that the practice of mindfulness meditation strengthens the same circuits that aren’t functioning in various psychiatric disorders, especially developmental trauma. As the brain becomes more integrated, people experience better physical health, less burnout, more intentional strength, and greater relational empathy. Physically, meditation and the state of mental presence are associated with optimized levels of the enzyme telomerase, which repairs the ends of your chromosomes as well as the epigenetic alterations that decrease inflammation.

So science has revealed that the mind can change the molecules of the body. But, obviously, the state of the mind is what makes all the difference. Mindfulness meditation helps the mind develop the capacity to be aware and present in the moment, open to what’s happening around you and within you as it’s happening. Being mindful—being present—facilitates integration and leads to a state of being that’s flexible, adaptive, coherent, energetic, and stable. FACES is the acronym I like to use to summarize this state of being. FACES is the outcome of a system that’s integrated, a state revealing the flow of harmony in our inner and interpersonal lives.

But what might this state of integrated consciousness look like if it could be applied to a whole society? I had an unexpected opportunity to see something like this when a group of us recently took a trip to Namibia, home of the tribes that seem genetically most closely related to the first Homo sapiens from which we’re all descended.

One night, sitting around the campfire, I asked the translator to ask one of the villagers a question. “Here in Namibia,” I said, “there’s horrible drought, famine, and many endemic diseases that are resistant to medications. And yet the people of every village we’ve visited seem very happy. Can you ask why they’re so happy?” My translator posed the question to the villager, who said something I’ll never forget. He said, “We’re happy because we belong. We belong to each other in our community, and we belong to Earth.”

Then the villager asked the translator a question for me. “Where you live, do you belong?” I was struck silent, and I thought, You know, I can spend a whole day, even in our small town, and not meet anyone I know. There’s so little that connects me to others or to the Earth unless I make an intentional effort to make it happen. I thought about the studies that show people—at least in the United States—are some of the most unhappy on the planet, even though we’re richer, have more food, and own more stuff than the citizens of any other country. It made me realize that we have a fundamental problem of not belonging.

Belonging isn’t giving up our identity, as many of us assume. Rather, it’s developing a sense of connectedness. Belonging emerges with honoring differences and promoting linkages as part of a larger whole. What does that mean and how does it fit with the findings of modern brain science and our task as psychotherapists? What you are is energy and information flow. Who you are is how that flow goes through you as a conduit and also how it’s shaped by how you construct things. You’re a conduit and a constructor. You’re more than just a singular noun. You’re an emergent process—so you and your clients are a plural verb. Where is your mind? Within and between. How do you make an integrated self? Cultivating the awareness that you’re both a Me that’s a differentiated bodily self and a We. You’re a MWe.

Think about what would happen if just the people in this room were to say, “We’re going to raise the next generation of children and adolescents—and maybe even try to reach the adults—to help them realize a broader, more integrated identity that’s not just a Me. I’m not just Danny, and you’re not just Billy or Sarah. You’re all the people who preceded you and all the people who will be here after your body is gone.

The world is waiting for us to get to the next stage of the evolution of the mind. That means moving beyond the old idea that the totality of the self is entirely contained by, and is synonymous with, the physical body; beyond the old idea that each individual self—your self, my self—is completely separate from other selves, not to mention the rest of the physical world. That’s what Albert Einstein called an “optical delusion” of consciousness. And it’s in getting beyond that delusion that we can begin to embody the more integrated sense of MWe that will make possible a kinder, more compassionate, more connected world, where we belong to each other now and we belong to the future.

This blog is taken from "The Science of Consciousness" by Daniel Siegel. Check out more from Dan Siegel in the May/June 2017 issue, What Now? Five Therapists Face the Limits of What They Know.

Read more FREE articles like this on Brain Science and Psychotherapy.

I'm pleasantly surprised and encouraged to read this. As a writer (and therapist), I've observed this unhappiness in North America and witnessed the opposite in third world countries that had so much less material possessions than we have. My conclusion had been because they had such strong relationships. You have confirmed this for me. Thank-you for raising awareness on this. I am currently writing a parenting book that incorporates this we/me that I used to raise my own children. Young children really can learn to be aware other people's needs/importance and balance it with their own so they can make room for both the self and the we/others. They don't need to be older to learn this. You avoid a lot of parental challenges taking the time to do this. Thanks again for such an important article.

If one can imagine the mystery, thoughts, teaching and behavior of Jesus Christ, and correlate this with Einstein's gifts........all superimposed upon Quantum Physics and the human Soul.........we have a beautiful link with Dan Siegel's creative idea and creative tapestry of human nature. and the Emergence Factor.