We're Being Smothered in Data. Here's What Therapists Can Do About It. 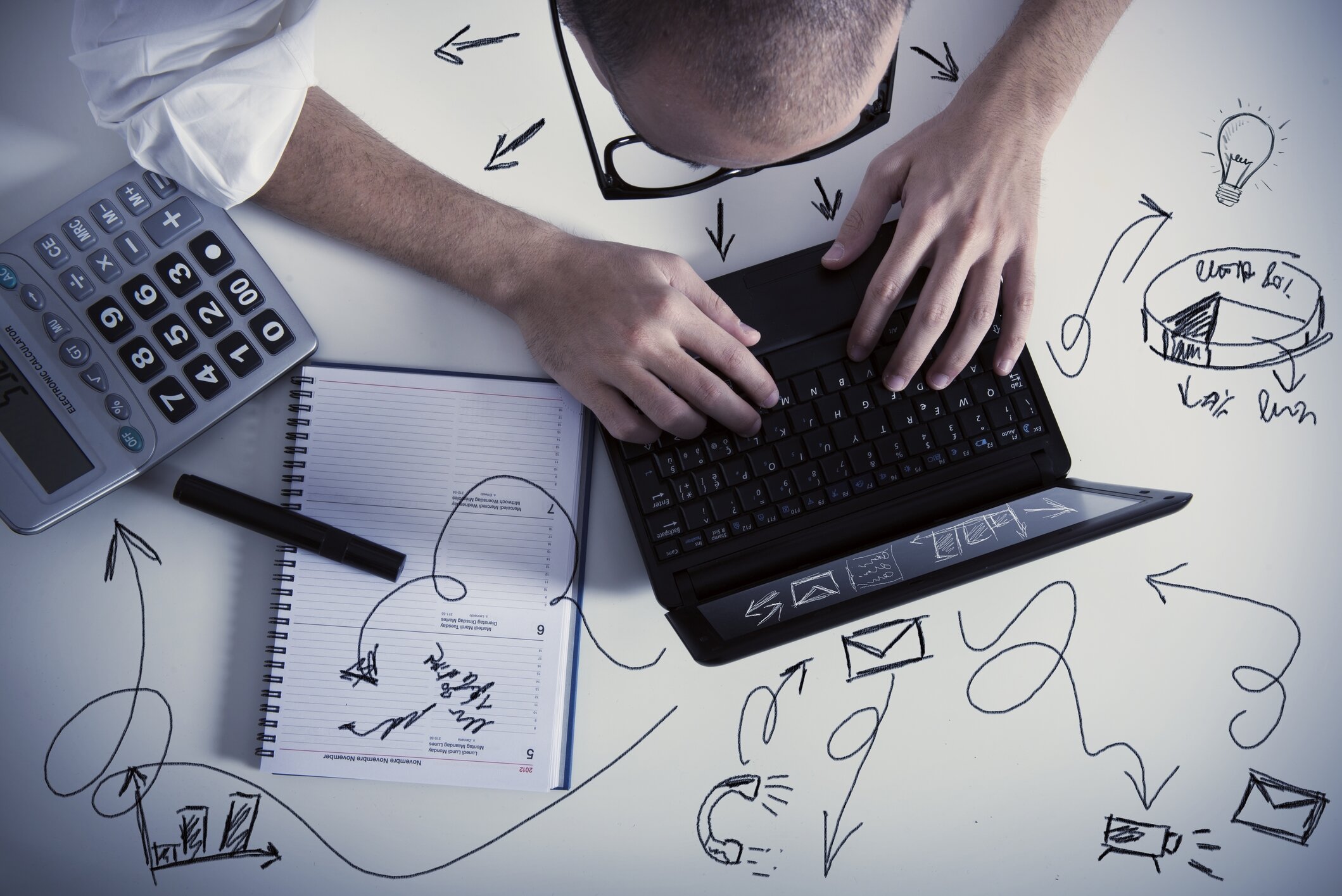 Let's say an attractive, nicely dressed, 45-year-old woman comes in to see you. She's a market-research analyst, or a public relations administrator, or a bank-loan manager, or a pharmaceutical company sales rep, or a medical-records specialist—one of those myriad occupations you know nothing about. She complains of being depressed, anxious, and exhausted all the time. She and her husband aren't getting along, and her teenage son seems to get surlier by the day. Not that she sees much of either one—her workday begins at 6:00 a.m., when she gets up, and ends at 7:30 or 8:00 p.m., when she finally opens her front door, carrying a heavy briefcase in one hand, a bag of takeout food in the other.

During the first few sessions of therapy, you focus on her mood and emotions, personal history, marriage and family, sleeping habits, possible substance abuse. You don't ask her much about her job. She mentions it's stressful and there's been downsizing, but she doesn't seem to think it's relevant to her problems, so why should you?

In fact, however, her stressful job may be a vital key to all her complaints. By not fully investigating her work life, you might be neglecting the most important clinical issue of all. You'd also be missing a profound shift that's taken place in the commercial world in the last couple of decades, which has profound consequences for our clients' lives and our entire culture: the increased intensity of workplace demands and the overwhelming intrusions of "the job" into our home and personal lives. While we may be hearing complaints of depression, anxiety, mood changes, fatigue, sleep problems, and tranquilizer and/or alcohol abuse, what we're likely seeing is the toxic impact of the workplace on our clients' overall well-being.

Realistically, there isn't much we can do to transform corporate and bureaucratic cultures or the economic pressures behind them, so how can we help our clients become healthier workers in admittedly unhealthy work environments? To begin with, it's imperative for therapists to understand the features and demands of the 21st-century workplace that are having unprecedented impacts on the well-being of workers.

The Sources and Effects of Technostress

As might be expected, computers are at the top of the list of stress producers, with their chronic malfunctions and crashes, and the constant demands on employees to keep up their skills with increasingly complicated systems. The amount of stress malfunctioning computers create may be glimpsed from the revealing statistic that one in four computers has been physically assaulted, notes Peter Brillhart in his article "Technostress in the Workplace."

Other technologies that generate stress include cell phones, PDAs, blackberries, iPods, other wireless gizmos and gadgets that connect us to the Internet, and the networks that these devices enable. Even if we know how to use all of this cyberstuff, we're often not good at fixing glitches and can rarely repair the devices themselves. Of course, it's virtually a maxim that technogadgets fail at a rate directly proportional to the urgency of the task they're needed to perform.

Technostress becomes technodistress when the problems of using technology exceed the user's coping ability. Technodistress makes us irritable, confused, ineffective, frustrated, and anxious. When people are frustrated, they feel it physically first in elevated heart rates and high blood pressure and then also in the surge of the stress hormone, adrenaline. When we've got enough adrenaline flowing through our bodies to run a marathon, but no way to expend it, we end up feeling exhausted and drained, body and mind.

The heightened activity of the sympathetic nervous system that goes on for hours in such an environment contributes to anxiety, hypervigilance, and the inability to turn off stress to rest or sleep. Chronic, unalleviated stress of this kind not only compromises cognitive and emotional function, increasing the risk of mental illness and addiction, but also undermines the autonomic nervous system and brain stem, affecting vital signs and predisposing workers to mental and physical illness.

A term coined a decade ago, datasmog is basically a more colorful synonym for information overload, a pervasive byproduct of the Information Age. It refers not only to the condition of being overwhelmed by vast seas of Internet-generated information, but to the complex and often confusing processes of storing and retrieving it.

In today's work world, even the simplest decisions, communications, or projects are engulfed in this cloud of data, much of it caused by the sheer volume of e-mail messages. Brillhart's "Technostress in the Workplace" reports on a study of Fortune 1000 workers by the Institute for the Future that showed that each office worker in those companies generates an average of 178 messages per day—impossible to do by telephone or in person, but easy when one person can instantly send a message to one hundred or one thousand different people.

Datasmog taxes the brain by overloading it with a vast quantity of information lacking sufficient markers denoting what data is worth storing and what isn't. The human brain stores and retrieves information through associative networks, which link specific experiences with time, place, people, mood, and a host of other factors. If you think about how you learned to tie your shoes, you probably remember it in the context of who was there and when you learned it. If you're trying to remember something about the continent of Africa, chances are you'll associate first to the social studies teacher in junior high school who taught the class, or perhaps just the classroom itself. This associative process seems necessary to human memory. Being smothered in quantities of data, each bit unattached to any place, person, or event, makes it far more difficult to discriminate the vitally important from the merely trivial. We must concentrate harder to separate the grain from the chaff, and even so, we still make mistakes, resulting in confusion, wasted time, difficulty making decisions—and more stress.

Almost nothing increases technostress like the accelerated pace and increased hours of work, both perverse products of supposedly "streamlining" and "time-saving" technology. By some strange alchemy, the fact that technology allows more work to be crammed into fewer hours has resulted in extended work hours.

When one client, Mary, tried to discuss how many hours per day she was expected to spend at work completing a project, her boss brushed her query away, saying "The eight-hour workday is dead!" Just recovering from a stress-induced anxiety disorder, she was now hearing that she had to stay at her desk "until the work is done" if she wanted to keep her job. Predictable, reasonable hours are critical to managing energy output and restoration, but, as far as Mary could tell, her work was never done—one project merged with another, her workday and workweek never really "ended," and life became an endless treadmill of physical and psychic depletion.

Perhaps no endemic workplace condition causes more anguish among employees than the culture of contrived urgency, the ginned-up atmosphere of crisis, in which everything—every project, every report, every meeting—is an urgent priority, superseding all the other urgent priorities before it in the long queue. Economic pressures produce a high, steady degree of frenzied fear at the top of an organization, which cascades down to individual employees. The general hysteria creates an ersatz state of emergency that simulates a hospital emergency room, where every decision is a question of life or death—in spite of the fact that, as far as we know, nobody ever died from a missed deadline or a dissatisfied customer.

Employers, whether intentionally or unintentionally, intensify the contrived urgency by providing employees with blackberries, laptops, pagers, at-home faxes, and/or access to workplace computer data via the Internet. Setting aside the issue of boundaries for a moment, the clear message this sends is that the work can't and must not wait—it must always take precedence. The constant "ping" of instant messaging, paging, texting, and e-mailing gives a sense of urgency to the most mundane of messages.

As endocrinologist Hans Selye's groundbreaking research first demonstrated in the 1950s, people can only adapt to serious stress for a time before becoming physically, mentally, and emotionally exhausted—beyond which point, no further adaptation is possible. That point is informally referred to as burnout, which stress researcher Arie Shiron calls "vital exhaustion."

Burnout is characterized by constant fatigue (a symptom that could be interpreted as depression) and poor utilization of coping skills (people get easily upset, frustrated, tense, and nervous), which resembles clinical anxiety. In a state of chronic hyperarousal, people often can't sleep (so their energy isn't restored at night), they develop addictive behaviors to cope, get ill, become more susceptible to physical injury, and may even die if the stress is severe and lengthy enough. All these symptoms may look to us like typical mental health issues, but, if we don't address their fundamental cause—workplace stress—all the psychotherapy in the world (assuming the stressed-out person even has time for therapy) won't fix the problem.

What Therapists Can Do

Of course, no matter what the issue—bad marriage, bad family background, bad job—therapy can always help people become psychologically more grounded, more self-confident, and less vulnerable to letting other people tap dance on their heads. More specifically, however, we can teach our clients how to set reasonable limits at work in ways that all but the most psychopathic employer can accept. Some of what we tell clients to assist them in dealing with workplace stress and anxiety includes the following:

An effective stress-recovery plan that's adaptable to virtually any workplace is to establish 2-minute recovery drills to follow each 90-minute sprint of energy. Those who work at computers can program pop-up reminders to prompt them to engage in their recovery rituals. Physical recovery rituals to suggest to clients can include the following:

Doing 2 minutes of relaxation at their work station or on their break. For example, they can take a 2-minute mental vacation by closing their eyes, thinking of a pleasant experience, and calling to mind how each of their senses was involved. Clients less oriented to imagery can learn to calm down and check their own biorhythms by using computer-generated biofeedback mechanisms, such as Heartmath, Stress Eraser, or Wild Devine.

 - Doing desk stretches or desk yoga, going quickly through each part of the body.

 - Getting up and getting a glass of water.

 - Getting outside for a breath of fresh air.

 - Of course, the most important way of replenishing energy is going home—without work.

As psychotherapists, we aren't going to stop the techno-behemoth from transforming the workplace in ways that aren't good for human beings. But we know better than either industry or government how to assess the impact of work on people and, more important, how to help them find ways of surviving in toxic workplaces. As we help clients deal with burnout, we'll be impacting the mental health problems it causes. Of course, we shouldn't stop assessing the underlying causes of mental health problems—people suffering burnout from technostress can still have histories of trauma, relationship problems, depressions, or anxieties unrelated to their jobs. But if we stop ignoring how much work has become a highly toxic influence on mental health, we can become a resource for increased well-being that workers can't find anywhere else.

Margaret Wehrenberg, PsyD, is in private practice as an addictions counselor and a psychologist. She specializes in anxiety treatment, using a holistic approach for symptom management. She's the author of The Anxious Brain: The Neurobiological Basis of Anxiety Disorders and How to Effectively Treat Them.

This blog is excerpted from "Technotrap" by Margaret Wehrenberg. The full version is available in the March/April 2008 issue, A Nation of Insomniacs: Reclaiming the Lost Art of Sleep.