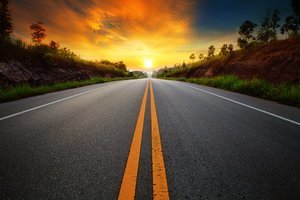 The day was sunny, but cool enough to wear a suit without sweating. I'd felt restless driving to the service, attended by only a small collection of our extended family. Now that we were done telling stories and singing a few songs, I was ready to leave.

I'd offered to take the first leg of the three-hour return drive home with my dad. Flipping through his appointment book as I drove, he looked good—well, better. His final course of chemotherapy had just ended, and there was a chance that the cancer wouldn't come back. We'¬¬d just have to wait and see.

We passed a sign for the intersection with East 196. "Do I make a right up here?" I asked. I'd been to Williams-town a handful of times before, but I asked just to be sure.

"Yeah," he said without looking up.

We turned off Maine Street with its proudly middle-class colonial homes, and onto 196, a wooded, winding road, which would eventually connect us back to the interstate. The pavement was freshly tarred and painted, and the yellow lines shone brightly as they darted along the black pitch.

"So, Mike, talk to me." Finished with his appointment book, Dad now wanted to have one of those conversations. I felt a slight smile creep onto my face as I sensed a familiar ritual begin to unfold.

"About what?" I said, priming the inevitable response.

"About you! What's going on? How you're feeling about graduate school, Lindsay, me, us, the family, everything." My dad loved having this kind of getting-to-the-heart-of-things talk. I reached down to turn on the air conditioner and tried to decide whether I wanted to really talk about something or just bullshit.

"Well, things are good." I said, opting for the latter, "Lindsay and I are really happy and my first year of graduate school was great. I think I'm worried about having to live apart from Lindsay next year, but we'll manage."

"And what about the move to psychology?"

This was a good question, but one I didn't want to go into. Three years ago, I was working at an international venture-capital firm, before going back to grad school in clinical psychology.

"Well," I said, dragging out the e, as if by doing so I'd find a way out of really answering his question.

"I guess I just feel like I have a lot of catch-up to do."

He smiled knowingly. This wasn't our first conversation on this subject.

I glanced over at him. He was dressed in the green blazer that used to belong to my grandfather—the man we'd buried this morning. It had looked better on my grandfather. Even at age 92, when his 6'1" frame had long since been stooped by years in business and politics, he'd always maintained a commanding presence. He'd had spent his life trying to be perceived as important.

"I still worry about whether I've made the right decision. It's like this is my last chance to start over if I'm going to be successful."

"What does being ‘successful' mean to you?" Dad asked in that familiar probing way.

I wasn't sure how to answer the question. I'd left finance because it felt empty. There was rarely a personal connection, and I missed that. The only time I ever enjoyed venture capital was when the subject shifted to something other than finance. Every so often, a tired CEO would vent about his struggles with his kids or the stress of an upcoming business deal. I found myself coming to life and experiencing what the world looked like through their eyes. It made me feel as if I were doing more than just building wealth.

I pushed down slightly on the accelerator and felt a brief rush as the car jumped forward. I realized how much I missed driving it. It was a BMW that I'd bought several years ago, when I was making good money. Now that I was a student again, I couldn't afford it, so I'd sold it to Dad.

"I guess being successful means what it's always meant to me," I said finally choosing to tell the truth. "Being important. Being a big shot. Having the kind of career that impresses people, in which you feel powerful. Remember, I'm the kid who wanted to build the laser."

Dad chuckled. The laser incident was a familiar touchstone for us. At 7, for a science project, I'd attempted to combine a telescope lens, a prism, and a small electronic light to build a laser. My parents saw a budding scientist in this exercise, unaware that my real interest in lasers was that they seemed powerful. Saturday morning cartoons always featured a bevy of wild-haired mad scientists with their death rays, hoping to enslave mankind. Although I wasn't interested in lording it over all of humanity, I figured that having my own laser would at least allow me to determine my own bedtimes.

"Are you still trying to build that laser?" he asked with an almost saccharine tenderness.
I slammed on the brakes. Dad let out a sharp grunt as his body lunged forward. A deer had wandered out onto the road, and I'd barely missed it. I caught a glimpse of its charcoal eyes, wide with fear, as it bolted back into the woods. We turned to each other with expressions of simultaneous surprise and relief.

"Jesus," Dad murmured as the car started forward, "can you imagine what your mom would say if I beat cancer only to be killed by a deer in the road?"

"Mike, when I was your age, just before I became a therapist, I was in the same boat as you are. For me it wasn't about making a lot of money, but it was about being a big shot right out of college, I'd gotten involved in radical politics and civil rights. I thought I was really helping people, but the truth was that I was much more focused on playing the role of a Great Radical Progressive."

"Really?" I said, shooting a quick look over at him. But my surprise quickly faded. Even if it had been an ego trip for him, at least he was trying to help people. I reminded him that my first job out of college was working for an Internet start-up, hoping to become a millionaire by 25. And when the dotcom bubble burst, I didn't go help a third-world country: I just moved right on over to finance.

It often felt that most of the people I knew—especially my parents—were genuinely connected to their work. I'd always seemed to be interested only in doing things that matched my sense of who I should be. The only time I'd felt otherwise was following my dad's diagnosis of lymphoma. Then all I really cared about was him. As painful as it'd been to see him so weakened, it'd also been strangely liberating—I finally had a sense of purpose. All I had wanted to do was help Dad get through this. Nothing else mattered.

"Besides," I said glumly. "You've always told me you feel a calling as a therapist."

"That's true, I do feel a calling. But it also took time. And sometimes I still daydream about what would have happened if I'd gone into politics. Most of the time, those thoughts make me shudder, but sometimes I wonder."

"But that's the thing, Dad. I'm still as focused on being a big shot as I ever was. Now it's as if my whole life is just a bet that eventually I'll be glad I chose a career that's more about helping people than on making money and feeling important."

As I looked at Dad, I felt as if I was waking from a dream. I realized that he'd just had buried his own father this morning. I felt my chest tighten as I remembered my dad kneeling on the ground, lowering his father's ashes into the shallow grave.

I found myself smiling as I focused again on the road ahead of us. The sun was now high in the sky, creating dark pools of shimmering heat. The brightly painted yellow lines stretched out before us, moving on side by side over a winding asphalt sea.

This blog is excerpted from "The Ride Home" by Michael Treadway. The full version is available in the March/April 2008 issue, A Nation of Insomniacs: Reclaiming the Lost Art of Sleep.