Why Do We Find Sexuality Scary?

Uncovering the Sexual Secrets We Keep from Ourselves 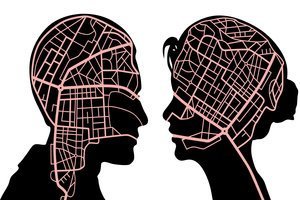 Today, sexuality still seems to be a territory as private and filled with fear as ever it was. You might argue the opposite, because so much about sexuality these days is fearlessly public—and that's true, if by "public" you mean the merely visible. But privately, we haven't advanced far in our ability to talk of our own sexuality, one with another.

As in days of yore, we embark on our individual sexual journeys with minimal guidance—zip, really. There's scant discussion about being a sexual being: how it feels, what we do, who we are sexually, and what that means to us as we go about our lives. We don't have much idea of what sex is for, even. (If it were only for reproduction, wouldn't we rut seasonally like other mammals?) Rarely can couples in long-term relationships expand the scope of their shared sensuality. Psychotherapy has gone from viewing sex almost mystically, like Freud, to making sex something so clinical it's almost boring, in the tradition of Masters & Johnson and their many descendants. Much of contemporary psychotherapy seems to have minimized sexuality to something that's no more than an element of relationship, rather than a force in itself, a realm all its own.

That's part of what makes sexuality scary: it is a force in itself, a realm all its own: one in which the rational and the measured are overwhelmed and subsumed. It's this "realm of the senses" (from the title of Nagisa Oshima's controversial 1976 movie) that ignites a relationship during that first buoyant period, when lovers experience intoxicating sensuality, and being irrational, overwhelmed, and subsumed is thrilling. But, if they last, relationships tend to settle down into a sexual sameness, or even not much sex at all. That's a familiar complaint from couples who find it necessary to enter a therapist's consulting room, when overfamiliarity can be a delicate dilemma.

What if "overfamiliarity" is a cover for something else? What if that "something else" is fear? Fear of the power that lies waiting in the dangerous places you may go in the realm of your senses, where you've been keeping secrets not only from your world and your lover, but from yourself?

Let's forego generalizations and get down.

In my twenties, sex was about compulsion. It didn't feel like a choice. In an odd way, it didn't feel like it had anything to do with me. The sexual imperative was impersonal. It gripped me and swept me up, not because I was me, but because I was human. There was no way I could choose not to have sexual feelings—which, I now see, was one ingredient in the psychological stew that made sex frightening for me. I asked myself, What kind of a joke is God playing? Why am I built to want something so deeply that, at the same time, I dread so much?

There was no shortage of lovers. I was attracted to women, and they were attracted to me. But sometimes, my fear was so great that even a little stimulation made me come prematurely. Or I'd fake the performance, not realizing that I was essentially having an out-of-body experience, my mind taking over by "faking" while my body did whatever it did, without sensations of pleasure since, really, I wasn't participating. Some rare times, I'd go wild with sex, and that felt like becoming someone else, someone I didn't know and wasn't sure I wanted to know. Of course, being a guy, I spoke of this to no one, including my shrinks.

Then I met . . . let's call her Zelda. She asked me out. "I know a neat place we can go," she said. "Let's go," I agreed. Not until we were a few strides inside the joint did I realize that Zelda's "neat place" was a raucous lesbian bar.

That's when I noticed that it was hard to tell about Zelda. There was something masculine about her: she was tallish, with cropped hair, and a manner that mixed humor with a gentle severity. Zelda's a dyke? I wondered. But what a body! If she's a dyke, she's a fantastic dyke! Lesbian bar—am I on Mars?

Loud rock and country music. Women dancing with each other. Women linking arms, talking, fondling, smooching. I was neither titillated nor horrified. I was in shock! What was I doing here? What was Zelda trying to prove? It was definitely a test. I didn't want to stay and couldn't leave: on the street I come from, there's nothing worse than chickening out.

Zelda said, "Let's dance." We danced, while I wondered who or what those lesbians thought I was.

I never learned whether Zelda had been with women, but we spent a year or so together, during which volatile arguments counterpointed our equally volatile, celebratory sex, the best I'd as yet experienced consistently. In retrospect, I know now that something about Zelda's masculinity awakened me sensually—except that wouldn't make sense if you saw her. She had incredible breasts . . . and her legs went on forever—nothing masculine that way. But she had such sensational sensual power, and power is a quality we perceive as masculine. So what was it? Now I'd say that our boundaries were smudged. In bed, nothing was one thing or another: maleness and femaleness flowed freely within us both. Everything was in-between in our realm of the senses—and, in that in-betweenness, for the first time, I felt sexually empowered and free.

In-betweenness, from my first experience of it, was interesting on every level— much more interesting than being, sexually, only "a man." But the in-between state had its ups and downs. Over the years—in relationships and brief encounters—I felt as though my body time-traveled. Sometimes, in sex, I'd inhabit my body fully; sometimes it was as though I was back in my up-tight twenties; and always it was as though my body shifted its valence, as it were, with each person, or shifted at different times during a sustained relationship, differently on different nights, or different from one year to the next, one stage of life to the next.

You can be in a relationship for years and suddenly see a face upon your lover that you've never seen and never guessed was there. Slowly I realized that it wasn't "as though" my body changed sexually with different people and different situations; it did change. Human beings are such powerful receptors and radiators that you quite literally change what I'd call your "imaginal body" in sexual intimacy with another, and the other changes in turn. This is so far from the model of sexuality presented by and to mainstream society that it took me some time to entertain the notion that perhaps it was society in general, and not me, that was sexually freakish. Society says you're one thing or another—male or female, straight or gay, young or old, human or animal. But the deeper you venture into the realm of the senses, the more you encounter the shape-shifting reality of your in-betweenness in feelings and sensations that are male and female, straight and gay, young and old, human and animal. This can get more than a little confusing.

A genuine breakthrough alters the rhythms and patterns of the sphere of life related to it; more subtly, in areas not as accessible to language, a genuine breakthrough alters the energies of one's life—the energies one radiates and attracts. It's no coincidence that, after this experiment in ritual (which I never had the need or desire to repeat), the women who've been attractive to me and whom I've attracted have been centered sexually in what I've called in-betweenness. In general, my sexual life has become both more relaxed and more intense. More relaxed in that my in-betweenness has a solid center and I feel no insecurity about it, either physically or emotionally. How that's worked out concretely is that, contrary to what's continually broadcast by a culture neurotically transfixed on youth, sex in my fifties and now my sixties has been far, far more satisfying, intense, and entrancing than sex in my twenties and thirties. What a surprise!

For instance, I've been with a woman whom I'll call Zoe. She's a bisexual who usually prefers women and who's as often as not related to me sexually as though I were what she calls "a femme"—a designation that has nothing to do with my daily, walking-around, heterosexual persona, which I'd define as sort of tough-streetkid-growing-old-but-don't-mess-with-me. It's a persona I'm more than comfortable with, even sort of addicted to, yet being "femme" doesn't bother me. It interests me.

Zoe's explanation for calling me that goes something like this: "You're hetero, but you're not straight. I think of you as a lesbian in a man's body. Straight men—that I've been with, anyway—they're ignorant of the vastness of pleasure. It's all cocks with them. If the cock is up, they're happy. If it's down, they're crushed. Well, cocks go up and down! But we have lots of body, and any part of the body can come! A lover of mine, a butch lesbian, said, "Sweetie, I promise I can make your knees come!'—and she could. You know what you are, Ventura? A heterosexual queer." I feel I've been given a significant compliment—a kind of flag that stakes out my territory in the vastness of pleasure that's in-betweenness.

What does Zoe mean when she says that knees can come, that any part of the body can come? She means that, given proper attention, any surface of skin can be driven to a pitch of intensity that sizzles all the wires and rings all the bells—in different ways, with different sensations, from that of genital orgasms. The feelings are more like the varieties of orgasm that women report—waves of sensation—and as a male, I've discovered these comings can go on much longer than, and be just as intense as, penile ejaculation. Which is not to denigrate penile orgasm: it's just not nearly all there is; not nearly all that's possible. Since I don't inhabit a woman's biological body, I wouldn't dare say what inhabiting in-betweenness means for women, except that it has something to do with a note left me by Zoe: "I'm so glad that my breasts have touched the back of your thighs and calves."