Therapy Outside Your Comfort Zone (and Zip Code)

How a Trip to Nepal Uncovered a Professional Calling 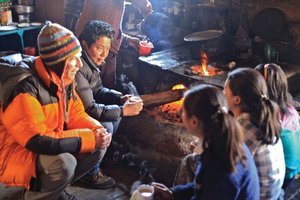 Editor's Note: The following excerpt is from an article that originally appeared in our November 2008 issue. Dr. Kottler continues to do work in Nepal as founder of Empower Nepali Girls. Here's the story of how he got his start.

I first went to Nepal seven years ago. After taking four planes, a bus, a truck, and an hour's walk, I found myself in a remote village in the Chitwan District, near the Indian border. I'd gone there to do research on maternal mortality with Kiran Regmi, then a Nepali doctoral student of mine, who worked as an obstetrician in rural districts near the Indian border. She's one of the few female physicians in her country, and one of the few doctors who practice outside of Kathmandu, Nepal's capital.

As part of our research, we were interviewing new mothers about their childbirth experiences, trying to figure out why women didn't seek medical service even when it was available (90 percent of the population has no access to professional healthcare), and why Nepal has one of the highest maternal mortality rates in the world. We soon learned that part of the reason was the frightening and humiliating experiences the lower-caste women we interviewed had endured at the medical facilities, which they'd often journeyed several days to reach. They told us that "snakes" had been put in their arms—intravenous tubes that were never explained—and the doctors, all men, shamed them by touching their private parts. They declared that they'd rather die than face such an ordeal again. They warned other women of the village never to go to those bad places, where they'd been treated like animals.

We learned that other women having difficult pregnancies who desperately wanted to seek medical care were often forbidden to do so. It took a bit of probing to find out what was going on: their mothers-in-law believed that difficult labor indicated that the pregnant women had done something to anger the gods, and it would be best if their daughters-in-law died so their sons could find stronger, less troublesome wives.

During these interviews, I learned something else that came as an even ruder shock to my Western sensitivities: I began to hear about girls who were disappearing from the villages, although nobody could tell me where they went or why they were gone. It took some digging before I learned that many families couldn't afford to feed and educate all their children (the average income in Nepal is $210 per year), so they'd sell their girls to "employers" who promised good jobs in India. I was never sure whether the parents realized that most of these girls, some as young as 9 years old, ended up in brothels in Mumbai. It seems that HIV-positive men believe that having sex with a virgin will cure them. After the girls were infected, they'd typically be sent back to their villages, where they'd spread the disease. It's estimated that this is the fate of more than 7,000 girls each year in Nepal.

One day, after explaining what lay ahead for many of his young female students, the principal of the village school said to me, "Do you see that girl over there?" He was pointing to a 14-year-old girl who was talking with friends in the schoolyard.

"Her name is Inu," he continued. "She will be disappeared next."

"Disappeared? You mean she'll be leaving the village?"

The principal nodded, then started to turn away.

"Hazur," I said, using the Nepali words to beg his pardon, "I'm curious. Yasko kati ho? How much would it cost? How much for Inu to stay in school?"

"Oh, it is very much, Sir. She must have a winter uniform, and of course a spring uniform. After the fifth year, all children must pay school fees. Then there are the books and supplies she must have. Plus dal bhat." The latter referred to the food staple: rice with watery lentils.

"And how much will all that cost?"

Without thinking this through, without considering the implications of my gesture, I reached into my pocket, peeled off three 1,000-rupee notes, and said, "Here, this is for Inu's school. She stays in school."

That was seven years ago.

Even as I was caught up in the feelings of that moment, I realized that a single impulsive gesture wasn't going to make much of a difference for the thousands of young girls being sold. What would it take not only to save the lives of lower-caste girls who wouldn't otherwise attend school, but introduce role models and opportunities that would expand the possibilities for their lives?

I didn't know the first thing about starting and running a charitable organization, and most of what I did know was discouraging. Among the largest charities, the majority of donations go to pay for buildings, staff, expenses, overhead, and travel. Once corruption enters the picture in developing countries, as it often does, a minuscule amount of money filters down to those who need help. I'd seen representatives of most charities and foundations staying in four-star hotels in Kathmandu, driving around in Range Rovers. Besides, I understood enough about systemic change to know that throwing money at problems is unlikely to make a lasting difference.

I decided early on that I needed to use what I knew as a family therapist, respect the children's culture and family context, and build an organization that would become self-sustaining. Kiran and I, plus a Nepalese businessman, Digumber Piya, and several therapist-friends, put our heads together to find a way to help the most-neglected girls in Nepal, those from the poorest, most marginalized regions. We envisioned an organization made up entirely of volunteers—no overhead, no salaries, everyone paying their own expenses; all donations would go directly to the children's education. But we were far from having a road map. Who would volunteer? How would we spread the word? Where would we find our hypothetical, idealized "volunteers"?

At this point, we realized that we'd have to find a way to provide not only resources for the children, but also ongoing mentor relationships for them, especially with women role models. My feeling from years of experience teaching and doing therapy was that even big donations wouldn't amount to much if they weren't followed by ongoing supportive and constructive alliances.

I ended up taking a dozen friends, students, and professionals with me, all of whom would raise money for scholarships and act as witnesses for those who contributed, taking back with them the stories of the girls we were supporting. At this point, I had no clear agenda in mind, except that I wanted others to see what I'd seen, hoping they'd be as strongly affected as I'd been.

During this first trip, and a half-dozen that followed with more than a hundred other therapists, students, and health professionals, we devised a plan in which we'd divide into small teams, each assigned to do home visits for each of the scholarship girls. Spreading out around the region, we'd walk an hour or longer to each home and then conduct our intervention in front of the extended family members and neighbors. Typically this involved drinking milk tea and eating an egg, after which one of us would give a speech: "We are here to honor your daughter. We have come very far to be here with you because we believe it's so important that your girls have an opportunity for an education."

Even with a translator accompanying each team, it wasn't the words that were important as much as our presence. Since almost all of those who were involved in our effort were professional women, the girls and their families could see for the first time how women could attain positions of authority and expertise, like Kiran, my first partner in this project, had. In the villages where we operate, this has proven to be a key factor in virtually eliminating the enslavement of girls.

Most of the team members spend only a few days in each village, while Digumber, Kiran, and I visit far more often for extended periods of time. Several of our volunteers have elected to spend weeks teaching in the local schools—which is a challenging task indeed because of language difficulties. Recently we've recruited several students (two from Norway, two from my university) who are willing to spend a year developing closer relationships with the girls. The girls need mentoring just as much as they need funding to continue their education. Never having been outside their villages or districts, they're unaware of what's possible for them in the wider world.

We've found that each one of our children—85 and rising—requires different kinds of help and interventions, just as therapy clients do. Ganga and Jumina, 6-year-old twins, recently lost their father to AIDS, but not before their mother had become infected. The mother isn't expected to survive the year, which will leave them orphans without any home. Before we heard about their plight, the family had gone 10 straight days without food because the mother had been too sick to work. Every morning, with wheezing breath and collapsing lungs, she walked with her children for two hours across two Himalayan passes to get to the village to attend school, and then rested all day until they made the journey home together. We recruited a couple in Spain who "adopted" the children as a surrogate aunt and uncle, agreeing to support them in boarding school. When I informed the mother what we'd arranged, we both began crying and hugging each other. "Now I can die in peace," she said.

Visits of only a month or so impose limits on what we can do. Though Digumber and Kiran, and some of our Nepalese volunteer staff, continue ongoing connections with the schools and families on a weekly basis, we've needed to find a way to increase our efforts. Our latest plan is to help develop a counseling curriculum for doctors, nurses, and teachers—one that's appropriate and useful for their cultural context. With so little medicine and so few resources, compassion and empathy can go a long way if embedded within some basic helping skills that have never been part of their training. Our volunteer teachers and therapists have been instrumental in offering workshops to health professionals and educators in remote areas.

In a place like Nepal, I sometimes feel that it isn't entirely clear who's helping whom; being with these people awakens strong feelings of gratitude and humility. I see porters walking barefoot in the Himalayas, carrying 200 pounds on their backs, attached by a rope to their foreheads. They eat rice and lentils twice each day, drink sweetened milk tea, and walk 12 hours, up and down mountains, yet each one greets us with a huge grin and tented palms in the traditional sign of respect: "Namaste"—my spirit honors the divine within you.

This blog is excerpted from "From Intention to Action" by Jeffrey Kottler. The full version is available in the November/December 2008 issue, Now What?: Putting Therapy Skills to Work in Our Post-Election World.