Pets: Our Most Unassuming Teachers 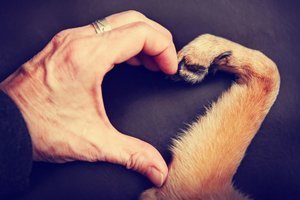 The first one was Rocky. He was a black-and-tan long-haired German shepherd, who went to college with me and then to graduate school. We were back in San Francisco. I was a postdoctoral fellow, and my father was visiting. When Dad and I came home after dinner, Rocky was lying on the doorstep. It was immediately clear that he was dead. He was peaceful, but he didn't move. We both stood there and looked at him. Then I went in and poured us each a glass of wine—which we never drank. We discussed what to do and, after a while, we went to sleep.

The next morning, we got up early. I carried the dog's body up the garden stairs from my hillside cottage and put him into the back of the car. Dad and I drove across the Golden Gate Bridge into Marin County, got off 101, and took Highway 1 to Mt. Tamalpais. We drove quite a way up, until we were almost to the Mountain Theater, where I pulled off and parked. We walked up a little hill to a lovely spot, me carrying the dog, my father carrying the shovel. I set the dog on the ground, collected myself, and decided where to dig his grave. Dad said he'd take a little walk.

I set to work. I stomped on the shovel and it cut into the earth. I dug and dug and dug, carving out a hole not quite an arm span long, a couple of feet across, and maybe four feet deep. I climbed into the hole to do a little more. I lost myself digging, engrossed in my thoughts. Suddenly, I looked up. I was surrounded by deer—10, maybe 8, all standing around me, the closest maybe three or four feet away. We just stood there, looking. After a while, maybe 30 seconds, I became aware of myself. The deer did, too. They pranced back a couple of steps, stopped, and continued to stare.

My father came walking down the hill. He'd been up a hundred yards, beneath a tree. I climbed out of the hole. He said he'd been watching the whole time, and the deer had been there, around me, maybe 15 minutes.

I hoisted the dog's body over the hole, and lowered it gently. I stomped the shovel into the pile of dirt and tossed the first shovelful into the grave, then the next, and the next. When I'd finished, Dad sang the Hebrew kaddish beautifully and soulfully, and we went home.

Years passed. Jennifer and I married, we had our son, Alex, and then we got Snowball. He was an all-white German shepherd (not an albino). There was something spiritual and almost preternatural about him. I thought he was gay, but Jennifer thought he was wise and an "old soul." He was mostly quiet and gentle, though one time he pounced on an elderly cat and dispatched it by breaking its back with a shake of his jaws.

He grew old with us. When the time came, we called our mobile vet, the aptly named Dr. Blood, who made housecalls for humane euthanasia. We'd already given Snowball some Valium when Gary arrived. He gave the dog an injection of another relaxant, and then prepared his needle with the stuff that would stop Snowball's heart. We held our breaths and watched as he gently injected it. He pressed the plunger all the way in and withdrew the needle. Snowball lay there. His eyes closed, and he stopped moving. He appeared to be gone. Just then, he lifted his head. He got an enormous erection. It was pink and wet. He licked himself, twice, and shuddered. He laid his head back down, sighed, and then died.

All was silent. Then Jennifer spoke: "He's a Hoyt!" Everyone laughed, and we carried him in a blanket out the bedroom door, around the house, and down to the creek-bed, where the grave I'd dug was waiting for him.

Last week, Ranger got hit by a car and killed. We were away in Portland, visiting Alex to celebrate his 21st birthday. Often called "Mr. Gorgeous" because of his movie-star looks, Ranger had gotten away from the housesitter, run around loose for a day, and then got hit. Jennifer and I had come back early Monday and had been frantically looking for him when we got the news.

Friday, we buried him. In the morning, I dug another grave in the creek-bed. My eyes were full of tears, sometimes thinking of the sweet times we'd had, sometimes thinking about my other dogs, Rocky and Snowball. When the grave was done, I climbed out, showered, and drove across the Bay to the animal-control center that had him, and claimed the body. I was wearing my German shepherd T-shirt. The clerk was polite and directed me to drive around back, where a technician came out pulling a large wagon. Ranger was on it. They had wrapped him in three or four plastic bags, but you could see it was him.

We loaded him into the back of the Prius. I put a tarp around him and drove back to Marin County. When I got home, I somehow hefted the 100-pound package and managed to carry it down the creek embankment and over to the grave. I caught my breath and lowered him in. I used my shovel to pull back some of the plastic to see his black-and-tan fur. I gazed for a moment, and then recovered him with the plastic until Jennifer could get home.

When she arrived, we sat on the couch and talked for a bit, and then she went to change her clothes. Meanwhile, I walked around the garden with a big white bucket and a pruner, cutting a flower from each plant. It felt as though the plants were crying for their lost friend, who'd spent so much time among them, and the flowers were the tears I collected. There were forest flames and hydrangeas, callas and penstemons, marguerite daisies and potato vines, red geraniums, abutilons, lions' tails, Bowles's Mauve, foxgloves, and those tall purple things that I don't know the names of. I took the flowers down to the creek-bed and spread them across the body, and then went back up to get Jennifer. Looking across the yard, I saw the first agapanthus of the season poking up its long, blue, star-studded stalk. I walked over and pulled it from the ground, and then carried it to the bridge, leaned over, and carefully dropped it down into the grave.

Jennifer and I made our way down the hillside. We saw the beautiful flowers, and she tossed in Ranger's favorite squeaky toy. We spoke and wept a bit. I used the shovel gingerly to pull back the plastic. His head was still covered as we gazed down at his lovely fur. We cried and cried. I handed the shovel to Jennifer for her to do the first throw. She scooped a load and tossed it into the grave. Plop! And another, and another as I thought of romps in the woods, my hiking buddy, scratches behind the ear. We took turns tossing in dirt and recalling him, each going until we were worn out.

"The Thug of Thalia."

I rested my chin on the end of the shovel and sobbed, drool running down into the grave. As I looked into the hole, my eyes teary and blurred, the dog's body being covered with dirt seemed like I was looking at the years blur backward, like he was floating off into some sort of "tunnel of time" effect from an old movie, only this was real. When we finished, I looked across the creek and saw two new bamboo shoots, one about two feet tall and the other about six feet. It was corny and obvious—"life starting as life is being put to rest"—but wonderfully true. It made me smile.

We finished shoveling the last of the dirt, and were about to leave. "Ranger, this is Snowball! Talk to him!" I loudly commanded. Jennifer and I hugged, and left.

When we were back in the yard, Jennifer carefully washed the shovel.

Three and a half months later, we adopted Maxie from German Shepherd Rescue of Northern California. She's a sweet, shy, 2-year-old black-and-tan with long feathery hair around her ears. She's our first girl dog.

This blog is excerpted from "Dust to Dust" by Michael Hoyt. The full version is available in the March/April 2009 issue, In Search of a Safety Net: Helping Our Clients and Ourselves in the New Economy.