We Weren't Meant to Live in "Screenworld"

Why Therapy is the Counterculture We Need 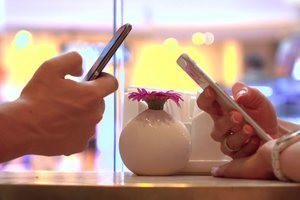 Not so long ago, I taught a graduate writing seminar in which I got caught in an argument about virtual vs. "real" experience. Two students—among the brightest in the class—insisted that they could go to Rome via a computer program through which they could view every street, turn this corner and that as they pleased, look at every ruin and work of art, and their experience would be as real, as engaged, as if they'd actually been there. "But," said I, "a pigeon couldn't shit on your head."

Granting that any experience can be called "real," in that it is an experience, I argued that there are differences in the nature of virtual and actual reality. For one thing, on your walk through a virtual Rome, you aren't even walking: you're sitting. And what's Rome without the wonderful smells of food? Even if your virtual Rome is accompanied by recorded sounds of Rome, that's nothing like the sounds of racket, traffic, music, and language, the melodious cacophony of Italian, spoken all around you. A flat screen gives you no sense of Rome behind you, and to the side of you. The rain won't rain on you, and you won't have to dodge crazy drivers.

You're having a one-dimensional experience, literally and figuratively. And no matter what's inputted into the program, there's no chance of running into the girl who sat next to you in high school chemistry—or anyone else. What R. D. Laing once called "the freshness and forgivingness of creation" couldn't reach out to you, nor you to it.

My students didn't get it. My argument left them utterly unconvinced, and they looked at me bemusedly, as though I was mildly to be pitied because I didn't get it.

What separated us? Between my sense of the real and theirs gaped a chasm that I didn't understand.

What would a psychotherapist make of it? If, in your consulting room, one of these students told you that the Rome on his computer is more real than the real Rome, is that a symptom? if so, of what? Would it be a syndrome to be addressed in therapy? or just a piece of data, a reference-point for this particular client?

From Tactile to Virtual

I'm not a therapist: I'm a writer; but psychotherapy has always been key to how I make sense of the world, and I tend to look at behavior as symptomatic, in whatever sphere—intimate, political, commercial. Novelists and therapists share the fundamental assumption that behavior means more than itself, stems from deeper roots than what can be seen on the surface, and has wider implications than its supposed conscious purpose and assumptions. So it meant something when technologies that I view as disengaging became common in my own work. Something, but what?

I used to begin work with a tactile, blank page, making keystrokes on a typewriter whose mechanics I understood. Now I begin with a blank screen on a machine whose technology I can barely comprehend. I don't believe that's changed me as a writer, but I miss the typewriter's clickety-clack, the ding of the margin-bell, the movement of the carriage back and forth, the shudder of my desk under pounded keys. The computer, which once seemed alien, is now embedded in the dailiness of my life. I believe more than ever that a virtual Rome isn't Rome, and is, in fact, nothing like Rome, and I'd rather gaze at the Petrified Forest than photograph it—because, unless one is a photographer of the first rank, there's no way to trap that grandeur in a box. Still, it must mean something that when I look about me, I see screens, screens, screens—everywhere, screens, including right here, in front of me, right now.

At arm's reach are three: the trio of computers accessible from this chair (often I work on two computers at once). Another screen glares across the room—the television. My cell phone, also at arm's reach, has a screen, even though I bought the simplest device possible: it cost 10 bucks, but it can take and transmit photos and movies, and features menus I don't bother to understand.

Now you see screens at checkout counters and laundromats, in restaurants and waiting rooms, and on the dashboards of cars and in their back seats. Millions of regular folks preen for screens on YouTube and Facebook, marketing their image like politicians or starlets. What with Blackberrys, iPhones, and a 10-buck cell, few Americans go anywhere anymore without a screen that connects to every other screen in some way or other, linking to any event or broadcast or data source anywhere, including satellite photos of every address you know, and most you don't.

These screens disconnect us, too. I work where I live, so, theoretically, I need never leave my apartment: I can order shoes, pet food, people food, parts for my car, and lingerie for my girlfriend right here on this screen, and anything purchasable can be delivered right to my door. Now that I think of it, it seems like half the people I know met their present significant others via the screen, and they aren't kids: they're middle-aged and aging.

In 1949, George Orwell published 1984, a vision of the worst possible society, in which screens were everywhere, inescapable. History has turned out to be not nearly so gloomy but far more surreal. If in 1980, say, after directing Jaws and Close Encounters of the Third Kind, Steven Spielberg had made a sci-fi adventure-comedy called Screenworld, well, he might have envisioned something very like our world, which, in 1980, would have seemed dizzying, funny, ridiculous, scary, technologically promiscuous, 24/7 exhausting, and appallingly lacking in privacy (privacy as a fact and as a value). Above all, in 1980, Screenworld would have seemed impossible, or, at the least, an uncertain, unmanageable future that lay thankfully in some alternate universe, far, far away.

Yet today, here we are, you and me, often engaging the world more through screens than face-to-face. Without planning to, and without especially wanting to, willy-nilly, we've become citizens of Screenworld.

A Collective Delusion of Reality

Something enormous has happened: the scale on which our society judges a human event has changed—which, in itself, is a human event of the first magnitude, and is, to my knowledge, something psychotherapy has barely begun to gauge.

When a Blackberry brings the workplace with you wherever you go, where you are becomes less itself, less important as itself: the sense of a place loses its specificity, its particularity, its own complete reality. When you shop online, your community becomes less real; you don't need it as you once did: you don't need the bookstore; you don't need the music store. Losing their reality, such places disappear—literally. You walk down the street talking on your cell, and the observable world becomes a mere backdrop—unless you see something to video on your phone, when the world becomes your movie-set, gauged for its value as entertainment, not engagement. With an iPhone on your belt and an iPod in your ear, solitude is no longer solitary, while you hear not the sounds of the world, but your programmed soundtrack. The very idea of privacy is close to becoming alien, especially to the young, for whom to be "out of touch" is unthinkable, while calling and texting are seemingly constant. A place inaccessible to Screenworld is called a "dead zone"—which kind of says it all about Screenworld.

Isn't there something peculiarly disembodied about it? Human beings evolved to take in an enormous amount of information through our bodies. That's what "body language" is all about, not only gestures and postures, but physical inflections so subtle we aren't aware of making them in. Consider something as uncomfortably intimate as standing with strangers in an elevator: there are strict rules of elevator etiquette—never stare at anyone, keep your eyes front and slightly downward—precisely to protect ourselves from how forcefully bodies speak to one another, even unintentionally. Or consider the subtle signals that pass through a simple handshake. That entire realm of reality is absent from Screenworld, where one need never deal with the bodily strangeness of strangers—for even face-to-face on a web-cam, one responds to the image of a body, not a body, and that image rarely conveys skin-tone, not to mention scent.

Is this bad? Is it good? I'm not making those judgments. I'm simply pointing out that Screenworld is another order of reality, one that has overwhelmingly instituted itself amid what we used to call reality, changing the givens, the rules, the environment. As animals, we're built to live in a physical world; in Screenworld, we're living in something else. In our overlay of cyberspace and physical space, bodily reality is devalued, while the adage that "the unexamined life is not worth living" gets distorted into "what the screen does not record or project is not really happening."

The dilemma is: how does one find or grow a sense of centeredness amid this continually shifting screenscape?

If I felt the need to consult what would be my fifth (or sixth?) therapist, I'd be stepping into a space that's rarer and rarer: an American environment, an American institution, free of Screenworld. In fact, psychotherapy, by its nature and purpose, is Counter-Screenworld, Anti-Screenworld.

Consider the psychotherapist's consulting room: quiet, intimate, a place to which Screenworld has no access. Oh, there may be a computer about, but it isn't likely to be functioning during my 50-minute hour, because the purpose of my being there is to engage with my therapist in a face-to-face encounter. Rather than a devalued physical reality, in the consulting room, physicality is magnified. Client and therapist register every sigh, every glance, every fidget—and either they're looking at each other or they aren't, and both are intensely aware of that, either way.

My therapist and I meet privately to do a job of work, the work of understanding—as opposed to, say, conducting business, negotiating a contract, or any of the task-oriented reasons for which one may meet formally face-to-face. We meet in the consulting room to understand why I'm there. To do that, we try to understand who I am—because I don't understand anymore, or I wouldn't be there. To use the indelicate expression of my old Bronx neighborhood, I'm fucking up, or something's fucking with me, or both, and if that weren't so, I wouldn't be in your consulting room, and that's what you and I, therapist and client, face-to-face, will try to understand. And in that attempt, some foothold of understanding, however basic or tentative, whether achieved intellectually, intuitively, or emotionally, may spur wanted but unexpected personal change.

I wouldn't be there if I didn't want to change something, to feel more alive, feel more myself, deal better with whatever I've been unable to deal with. The therapist's sole job is to try to understand another human being, or at least another human being's situation—and in my hour, that human being happens to be me. In a world that's become Screenworld, incessantly inviting and/or goading me to pay attention to something other, only this Counter-Screenworld exists for the express purpose of making me face myself while facing another, and of inviting another to face the real me.

This blog is excerpted from "Screenworld" by Michael Ventura. The full version is available in the January/February 2009 issue, Face to Face: The Art of Connection in the Age of Screenworld.

Thank you for helping people get the information they need. Great stuff as usual. Keep up the great work!!!