The Women's Project Prepares to Pass the Torch 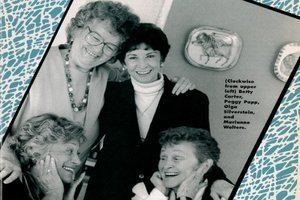 Editor's Note: The following is a highlight from our archives that showcases what we consider to be at the heart of what we do. The full article originally appeared in our November 1997 issue. For two decades, the members of the Women’s Project in Family Therapy were the outspoken feminist conscience of psychotherapy and, with their humor and warm camaraderie, became beloved role models in a field that had long been dominated by male leaders. You can read the full version of this excerpted article on our website.

Despite its monumental-sounding name, the Women’s Project in Family Therapy owns no real estate and doesn’t even have a listing in the phone book. In the 20 years that it’s been in existence, it’s produced only a handful of monographs, presented a few dozen public workshops, and published one book that sold all of 24,000 copies. Why, then, do so many people in the field believe that without the Women’s Project the development of family therapy over the past 20 years is practically unthinkable?

When they looked at Gregory Bateson and Jay Haley’s double-bind hypothesis, or Murray Bowen’s theory of differentiation, or Salvador Minuchin’s concept of enmeshment, they saw not so much a revolutionary new way of thinking about human behavior, but more of the same old sexism done up in fancy terminology. However abstract and evenhanded the theory sounded, they claimed that, again and again, in practice, the family dysfunction was balanced on the back of the mother. Rather than offering an eye-opening perspective on the inner workings of the family, they argued, family therapists were too often guilty of perpetuating the same cultural myths about men and women that got families in trouble in the first place.

When the Women’s Project first strode onto center stage, family therapists still aspired to the removed calm of astronomers peering through a telescope. In contrast, Carter, Papp, Silverstein, and Walters, all of whom knew firsthand the life of the traditional homemaker in prefeminist, post-World War II America, talked of the family from the inside out. And early on, they developed their own ritual for planning workshops, collapsing the personal into the professional. Camped out in Silverstein’s Manhattan apartment, with its panoramic view of the Upper East Side, the women would schedule two days for themselves and devote the first day entirely to updating one another on their lives and travails. “We talked about everything,” says Silverstein, “our husbands, our divorces, our kids. As we talked, we saw the connection between what we did as parents and wives and friends and what we did as therapists. We saw that all those roles weren’t something that interfered with your professionalism; they made you more of an expert on families.”

Their book, The Invisible Web, published in 1988, went beyond dissecting the sexism of traditional therapy to offering practical, nuts-and-bolts approaches to the issues of gender and power in ordinary practice. But the women’s broader achievement has been their role in persuading the field to move beyond the interior of the family to incorporate social and cultural issues into mainstream clinical thinking.

Of course, they could be scathing and combative at times, but the Women’s Project never fit the stereotype of grim feminist crusaders. When they talked in their workshops about the impossible imperatives to be both the perfect mother and the successful career woman, their tone was more knowing and ironic than angry. Somehow they managed to embody the voice of time-weathered clinical wisdom and the wise-cracking spirit of sorority sisters, teasing one another about their clothes, trading one-liners. Once at a workshop, a participant remarked, “The four of you seem so at ease with yourselves. What do you do when you’re anxious or uptight?” Before anyone else could respond, Walters grabbed the microphone and replied, “We eat!”

Don't miss our other blogs on Cultural, Social, and Racial Issues.