What Therapists and Their Minority Clients Are Saying 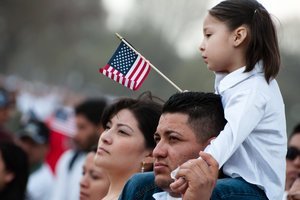 Editor's Note: This piece was written in late November. We welcome your thoughts on how you're working with new issues around the political climate your clients are bringing into the consulting room now.

It was almost midnight when Anita Mandley’s phone lit up with yet another text message. It was the seventh of her therapy clients she’d heard from on election night. Exhausted, she switched off the small television in her bedroom, crawled under the covers, and turned out the lights. For many people in Mandley’s Chicago neighborhood, the unthinkable was about to happen: by morning, Donald Trump would be the president-elect.

Having spent more than 30 years working with trauma clients, Mandley knew she was experiencing some undeniable signs of trauma herself. “As a woman of color,” she recalls, “I was immobilized. My heart felt like it was in my throat.” She lives in one of Chicago’s bluest neighborhoods, along with many Somali, Pakistani, Jewish, and mixed-race families. That morning, as she drove to work, just minutes from Grant Park—where Barack Obama had delivered his victory speech nearly eight years ago—the mood on the streets was suffocatingly eerie. “It felt like there’d been a death,” Mandley says. “I kept thinking, what’s going to happen to my block? My neighbors? How am I supposed to help my clients find hope when I can’t even find it myself?”

Since the election, therapists and clients alike have been grappling with the aftermath of what was arguably one of the most contentious and divisive races in modern history. Clinicians say it’s permeated conversations in consulting rooms, dredging up old traumas for some and creating a slew of new problems for others who couldn’t see eye to eye with family members, friends, coworkers, or even their spouses. Both Republicans and Democrats have been affected. According to the American Psychological Association’s Stress in America study, conducted in October, more than half of American adults surveyed—55 percent of Democrats and 59 percent of Republicans—reported that the election had been “a very or somewhat significant source of stress.”

But therapists like Mandley, who work mainly with minorities, say their clients have been disproportionately affected by what’s been going on. Since the election, the Southern Poverty Law Center has recorded more than four times the yearly average of hate crimes. According to NAACP President Cornell Williams Brooks, “The 2016 campaign has regularized racism, standardized anti-Semitism, de-exceptionalized xenophobia, and mainstreamed misogyny.” GLAAD announced the creation of The Trump Accountability Project, a catalog of the president-elect’s anti-LGBTQ statements and “other hateful rhetoric, discriminatory actions, and exclusionary worldviews.” The Council on American–Islamic Relations’ Government Affairs Director Robert McCaw criticized several members of Trump’s transition team, saying they “demonstrate a troubling acceptance of anti-Muslim bigotry, conspiracy theories, and agenda-driven policy proposals.”

A sense of mission resulting from all this has helped jumpstart many clinicians’ work in the therapy room. “I needed a way to move out of my contracted state,” Mandley says. “And that meant getting to work and being a compassionate witness to my clients’ suffering.” In fact, Mandley’s first client the day after the election was an undocumented immigrant from Ireland who as a child had been sexually abused by neighbors. Since hearing Trump’s hot mic comments on the leaked Access Hollywood tape, she’d been experiencing flashbacks and nightmares. “There’s no justice,” the woman had sobbed. “With Trump in office, there’s no safe place for me now.” In that moment, Mandley decided the best course of action was a simple but important one: creating an atmosphere of safety through empathic presence. “What you’re feeling is real and valid,” she told her client. “What does it feel like to have someone sit with you who gets what you’re going through?” The woman nodded and began to relax. “I couldn’t tell her that everything was going to be okay,” Mandley explains, “because I don’t know that. But I could say, ‘I’m here with you, and I’m not going anywhere.’”

Halfway across the country, therapist Margie Nichols was dealing with her own clients’ post-election crises. Since the late ’80s, she’d been a fervent LGBTQ advocate in New Jersey’s poor neighborhoods, managing an overflow of AIDS patients from New York’s beleaguered Gay Men’s Health Crisis centers back when, as she puts it, “there was public talk about tattooing and quarantining gay people.” Nichols, who mostly sees clients from the LGBTQ community, says every single one of them has expressed anxiety over the election, but on a scale she says is unprecedented in her 30 years of practice. “The atmosphere of doom has been really palpable for anybody who comes to see me,” she says. “They’re hypervigilant and on guard. Trump is legitimizing hate and bigotry in a way I haven’t seen since the ’80s.”

Nichols says many of her transgender clients have experienced setbacks since Trump’s election. Before November, for example, an older transgender woman she treats had been planning to come out to coworkers and her young son. But after the election, she decided to put her plans on hold, fearing Trump’s win had cleared the way for anti-trans discrimination. “I haven’t slept since the election,” she told Nichols. “I feel depressed in a way I haven’t felt in years. I can’t escape the feeling that everyone can see who I am, and they hate me. I feel suicidal again.” Another transgender client with a Republican father had decided to skip his family’s annual Thanksgiving celebration, explaining that his father’s vote for Trump felt like “a personal betrayal.”

Nichols is using a number of interventions to help her LGBTQ clients in these times. If they’ve worked through initial self-care routines and feel prepared for more active coping methods, she’ll role-play encounters with Trump supporters. In the case of the client who skipped the Thanksgiving celebration, she’s helping him find ways to connect with those who have different views. “Being confrontational isn’t going to help anything,” Nichols says. “But if people can offer some policy facts and explain to someone why this is a scary thing for them, they’re going to get more empathy.”

Additionally, Nichols says a particularly effective remedy for postelection anxiety is establishing a sense of community by connecting with like-minded people. There are many outlets to choose from, she explains, including joining marches, volunteering locally, or donating money to organizations dedicated to change. Some of her clients have even volunteered to walk fellow minority community members home from the local train station at night so they don’t feel unsafe. “I try to go beyond just validating and help people not only figure out how to protect themselves, but regain a sense of power and control,” Nichols says. “Ultimately, the only antidote to feeling frightened and helpless is feeling some sense of agency.”

A few weeks after the election, Nichols drove to a small, two-story building on the outskirts of Jersey City, the largest gay community in the state. Inside, employees of Hudson Pride, a transgender community organization, were busy planning a vigil for the Transgender Day of Remembrance. They expected a small crowd, maybe a dozen people at most, but as time passed, something exceptional happened. More and more people walked through the door, until the cisgender attendees nearly outnumbered the transgender ones. Soon, more than 50 people were crammed into the front lobby. “It brought tears to my eyes,” Nichols recalls. “It’s really meaningful to know there are allies who support you. Just showing up can provide a sense of safety. These days, that’s what I’m trying to do in my therapy work.”

For hours, the group, which included many low-income people of color from the neighborhood, talked and laughed over dinner “as if they’d known each other forever,” Nichols recalls. Afterward, they filed into an adjacent parking lot, held hands, and lit candles. After a moment of silence, they read aloud the names of every transgender person killed in hate crimes over the past year—87 in all. “It’s a hell of a way to get unity,” Nichols says with a sigh. “But I think we’re going to be okay.”

The real grief of this election, adds Connecticut therapist Elaine Ducharme, is that so many people say they’ve lost someone they loved. “At the end of the day, if we can remember that as a country we share a lot of commonalities, maybe it’ll help us come together and shape politics in a healthier way,” she says. Of course, some clients continue to work through the grief of Hillary Clinton’s loss. As Mandley points out, “There’s no Hallmark sympathy card for when Donald Trump becomes president. There’s no wake, and there’s no shiva.” But slowly, many therapists say their clients are beginning to rebound, employing self-care, keeping things in perspective, and when possible, doing what they can to stay vigilant. “Everybody’s coming up with their own version of what they need to do,” says Nichols.

Several days after the election, Mandley held a session with one of her quieter female clients, a young black woman who’s a sexual assault survivor. “You must be worried,” Mandley said to her. “I say good,” her client chuckled in response. Before the election, she went on to explain, rampant bigotry was seldom acknowledged by many Americans. Now that it had been brought to the surface, she felt motivated to be more of an activist. Soon afterward, she joined the online community group Pantsuit Nation—named after Hillary Clinton’s affinity for the outfit—where she was able to connect with other trauma survivors, trade stories, and eventually network with local organizations dedicated to policy change. “There was a point in my life where I couldn’t fight back,” the woman told Mandley. “Not anymore.”

Mandley recalls this session fondly, calling it a turning point in her client’s healing and her own. “There’s energy in them,” she says of her minority clients. “What’s my job? They already have the answers inside of them,” she explains. “I’m just welcoming the unfolding of parts that can stand up and fight. That’s the work.”

This blog is excerpted from "Healing After the Election" by Chris Lyford. The full version is available in the January/February 2017 issue, The Connected Self: Psychotherapy's Role in the Wider World.

Largely due to Democratic politicians demonizing the Republicans and hysterically reacting to every action and nominee as a sign Armageddon is around the corner.