How Much Are We Really in Control? 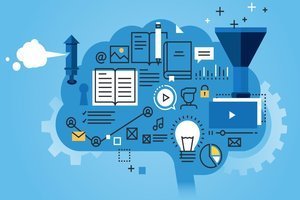 At the tail end of a sweltering, humid Chicago day in 1993, I took my family to the community pool for a dip. As the children splashed gleefully, I sat nearby reading Robert Ornstein’s new book, The Evolution of Consciousness, unaware that my life was about to change.

From the first page of Ornstein’s book, it was clear to me that he was on to something new. Using hard neuroscience data, he proposed that we behave irrationally because our brains are simply not set up to produce rational behavior. Throughout history, he argued, we’ve been operating under a great deception—we tend to believe that our thoughts and actions result largely from our conscious intentions. In fact, while our rational mind has a degree of veto power, the inclinations that fuel our perceptions, interpretations, and actions primarily come from neural processes that operate beneath the level of awareness. The fact that most of us have fallen for the great deception isn’t our fault. Because we’re aware only of our conscious thoughts, we readily assume that they’re the prime movers in our brains.

To support this idea, Ornstein cited the work of Benjamin Libet, the University of California San Francisco researcher who found that by monitoring brain activity, he could tell when subjects were going to initiate simple wrist-flicking movements before the subjects were aware of deciding to flick their wrists. Libet’s findings ran contrary to the way most of us experience ourselves. Most of us think, “When I move, it’s because I decided that I was going to move.” But Libet’s studies showed that impulse and inclination preceded conscious intention. It was as though somebody else in the subject’s brain decided when he or she would flick his or her wrist. Initially, Libet’s study stirred a storm of controversy, but over the next few decades, his findings would be replicated time and time again, with more and more sophisticated technologies, leading to him winning a Nobel Prize for his contributions.

The sun was setting by the time I reached the end of The Evolution of Consciousness. I hauled the kids out of the pool and herded them into the car. On the drive home, I remember thinking that if Ornstein were right, I’d need to rethink my assumptions about nearly everything concerning human behavior, including psychotherapy.

Investigating the studies cited in Ornstein’s book soon plunged me into the work of other pioneering researchers in the as-yet-unnamed field of affective neuroscience. Researcher Antonio Damasio’s work played a key role in furthering my understanding of the power of automatic processes in the brain. Damasio studied the brains of people who’d suffered a unique kind of brain damage that had left their cognitive abilities intact, impeding only their ability to experience emotions normally. Despite testing that confirmed that all the building blocks of rationality were in place, these people couldn’t make effective real-life decisions. At first, Damasio was puzzled. Why would impairment in the emotional brain interfere with practical decision-making? He eventually realized that the emotional brain plays a crucial role in the machinery of rationality: the brain generates quick, gut-level emotional reactions that collectively serve as a guidance system for reasoning.

Until reading Damasio’s studies, I’d assumed that successful people were effective because they resisted the pull of their emotions of the moment and used reasoning to guide their actions. Damasio’s studies powerfully challenged this notion, suggesting that disciplined people are every bit as much influenced by emotional impulse and inclination as undisciplined people are. The difference is that their impulses are more balanced.

Gradually, I began to accept the concept that conscious understanding and effort weren’t the mighty forces that I’d assumed they were and that automatic urges and inclinations were much stronger than I’d ever imagined. In fact, confirming evidence seemed to pop up everywhere. In my therapy practice, I began to notice the wide range of my clients’ natural inclinations. I saw some people naturally plunge into rumination whenever they got upset, while others let go and refocused with relative ease. Some naturally experienced an abundance of feelings of warmth, tenderness, and playfulness, while others rarely had these feelings—even when life was going pretty well. Some intensely felt a measure of what others were feeling, while others could only infer what people were feeling from their words and actions. The list went on.

Up to this point, most of my therapeutic efforts had been focused on helping clients develop better understandings of their lives and, as a result, make better choices. I’d wanted to help them live more consciously, but my confidence in the effectiveness of awareness and effort was waning. With my new understanding of the brain, I knew gut-level inclinations were more likely to sit in the driver’s seat, and the most that our conscious, willful selves could do was to try to influence these inclinations from the back seat, unless—and this was a big unless—there was a way to retrain the emotional brain.

One of my first experiments in trying to help a client engage in emotional reconditioning involved Steve, whose wife, Debra, had attended a few sessions and then dropped out of therapy. Steve continued on his own, recognizing that many of his relationship habits were dysfunctional. During previous conjoint sessions, I’d noticed that whenever Debra had voiced a complaint, Steve had predictably become upset and defensive. I knew that Steve would need some way to practice thinking differently at the moments when he was actually upset. So I suggested that he ask Debra if she’d record complaints on a cassette tape, which he could then use to practice being nondefensive. Surprised and intrigued, Debra agreed.

I sent Debra a message asking her to make short 15- to 45-second recordings whenever she felt upset with Steve—the more recordings, the better. After she’d made a week’s worth of recordings, she was to give the tape to Steve to bring to our next therapy session. During our next several sessions, Steve and I listened to Debra’s recordings together, and I helped Steve pay attention to his automatic reactions when listening to her critical tone. Without feeling the immediate pressure to respond to Debra, he came to recognize that when he felt criticized, his face typically flushed, his features scrunched into a scowl, and his hands tingled slightly. He also noticed that predictable thoughts popped up—such as She’s so controlling!—and that he always felt an immediate urge to dispute every possible detail of her complaint.

Together, Steve and I developed a practice plan that involved relaxing physically as he listened to her complaints, slowing his breathing down, reminding himself that he could afford to take his time and hear her out, maintaining eye contact without scowling, and then searching for and commenting on understandable aspects of her complaint. For several weeks in our therapy sessions, Steve practiced this sequence while listening to complaint after complaint. Then one day, he came to our session with a grin on his face, exclaiming, “I think this is beginning to work!”

A few days before, Debra had become upset with him when she’d learned that he’d forgotten to tell his parents that they needed to cancel their plans to get together. “You know what?” Steve said excitedly. “When she was yelling at me, I actually noticed that my breathing was slowing down, and I was really listening to her. I had the urge to justify why I didn’t make the call, but I remembered that I could do that later if I needed to and that I could take my time and hear her out.” Instead of offering an excuse, Steve told her that he should have made calling his mother a higher priority. “You should have seen the look on her face!” Steve beamed. The fact that Steve’s automatic reactions had begun to change after only a few weeks of focused practice made me believe that I was on the right track.

The Brain on Mindfulness

For almost 20 years now, I’ve been exploring methods for helping clients develop new, automatic inclinations that allow better self-regulation, self-attunement, perspective-taking, and empathy, especially in their intimate relationships. Research has shown that the nervous system changes promoted by mindfulness can serve as a stable platform that enables people to act more skillfully in all areas of their lives.

Neuroscientist and psychiatrist Daniel Siegel notes that the process of turning toward and soothing upset feelings (rather than focusing exclusively on the external threats) is what good parents do in responding to feelings of distress in their children. Similarly, distress tolerance and self-soothing exercises help clients turn toward their own upset feelings and engage directly in physiological soothing, temporarily postponing thoughts about problems. This process of self-accompaniment elicits a sense of calm in the storm, allowing clients to avoid alarm or panic when things aren’t going well.

In my work, I begin by asking clients to notice when small annoyances or disappointments occur in the course of each day. When they notice these frustrations, clients stop what they’re doing and spend one to three minutes resisting the urge to analyze their upsetting circumstances. Instead, they’re encouraged to slow down their breathing and focus attention on their physical sensations.

I’ve found that the key to reconditioning automatic reactions involves frequent reconditioning exercises that are practiced in close proximity to each other. The brain will acquire a new habit more quickly if a person practices the new habit once a day for 14 days than if a person practices it one time per week for 14 weeks. We want clients to understand that each day that goes by without practicing distress tolerance and self-soothing decreases the likelihood that their brains will begin to produce calming instincts and inclinations automatically.

Clients begin by practicing with mild upset feelings. Once they’ve worked with mild upset feelings every day for at least a week, they move on to more intense feelings. For this level of practice, we want the upset feelings to be stronger, but not so difficult that clients get hijacked by them and are unable to practice. One method involves having clients listen to complaints that their partners have prerecorded, as I had Steve do with Debra’s complaints in the days of tape recorders.

When I think back on that afternoon years ago when Robert Ornstein was first blowing my mind, I realize that since then almost everything about the way I conduct therapy has changed. I still help clients develop insight and make concrete plans for operating more effectively in their daily lives, but truthfully, this part of my work is more of a sideline. These days, my central concern is reconditioning the brain. Modern neuroscientific discoveries suggest that William James was right in 1890 when he proposed that the basic organizer of the human mind is habit, not rational thought or understanding. Thus, I believe that in the coming years, the most important developments in mental health will involve refining technologies for isolating and intervening in automatic nervous system habits.

This blog is excerpted from "The Great Deception" by Brent Atkinson. The full version is available in the January/February 2014 issue, Untangling Brain Science: Has It Lived Up to Its Promise for Therapists?

Very good article. I really appreciate how you used recordings to practice emotional skills. There are many reasons to recommend this technique. And there is one error that you may want to correct, that is, Libit was not awarded a Nobel Prize. Rather he was awarded the first Virtual Nobel Prize in Psychology from the University of Klagenfurt, which also seems to be the last of this prize. As you likely are aware, conclusions drawn from Libit's work are indeed all of the place. Thanks for this and all that you do.

Finally I found something useful to me. thank you