Change the Way You Learn

Communities of Practice Could Be Your Pathway to Clinical Mastery 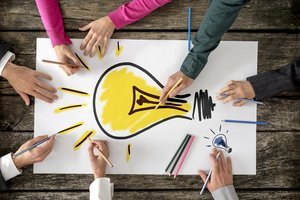 Despite what you may have heard about the transcendent importance of the lone creative genius, rugged individualism only takes you so far. The more we learn about people who achieve mastery in their chosen field—whether music, chess, or psychotherapy—the more we’re coming to appreciate the network of relationships that nurture and sustain them as they learn to excel at what they do.

As therapists, we often lead isolated professional lives, seeing client after client without meeting regularly with our colleagues to talk openly about our work, ask questions, share ideas, admit our failures, and analyze our best sessions. These typical aspects of practice may be limiting our professional and personal development.

People engaged in specific occupations have gathered together to learn from each other’s experiences since the beginning of time, but Etienne Wenger, a groundbreaking social-learning theorist and nearly full-time roving intellectual, has actually given such groups a name: communities of practice. During the last quarter-century, he’s studied how this universal, but often underappreciated, phenomenon of tapping our collective wisdom works.

This past year, the Networker has paid a lot of attention to the idea of communities of learning and communities of practice, with the key word being, of course, community. It’s not so much in the magisterial institutions of learning that therapists discover how to do the real nitty-gritty of therapy, but in the informal, often ad hoc conversations they have with colleagues. In the conversation that follows, Wenger lays out the basic principles of how to move from seeing therapy practice as an isolated endeavor to finding ways to approach the therapeutic conversation as the expression of a broader, more collective wisdom, which can transform the nature of what we do in our offices every day, for both therapist and client.

RH: What are “communities of practice”?

WENGER: I coined the phrase community of practice with my colleague Jean Lave in 1987, while we were studying how apprentice shoemakers learn their craft in certain African countries, despite the fact that little formal instruction or interaction with their teachers was going on. Instead, it was their experience with each other—whether seeing how their peers did things, or sharing information and shop talk—which was the main vehicle through which they learned their trade. Although the term is relatively new, the idea of communities of practice is old. It refers to a kind of a learning partnership between people who share something that they actively do, whether it’s learning a craft, pursuing a profession, or playing a sport. The concept applies to groups in which skills are learned and knowledge shared without the formal quality we usually associate with “vertical learning.”

RH: What are the advantages of the “horizontal learning” that takes place in communities of practice?

There’s no better critic of your practice than someone who’s engaged in the same pursuit. They know the craft is difficult, so they don’t judge lightly, but they know the tricks of the trade, so they aren’t fooled. The effective community of practice keeps pushing people beyond their comfort zone. Of course, I don’t want to romanticize the concept: not all communities shoot for excellence, but in those that do, people have a much higher chance of achieving excellence than they do working on their own.

RH: Why don’t people give more recognition to the importance of being in communities of practice?

WENGER: For many people, learning is something that can only take took place in a classroom. Or they think learning is a conference, with one speaker after another. They don’t think that talking together about practice is learning, because our concept of learning is so associated with our experiences of teacher–student relationships.

RH: Is that why most of us don’t put more effort into creating communities of practice for ourselves?

WENGER: Probably the main issue is that people don’t have much time because our lives are so full, and meeting together with others in a group always involves the risk that it’ll be a waste of time.

RH: People want to know there’s going to be a return on their investment?

WENGER: Yes, their time investment. But what we all need to realize is that, whatever the initial outlay of energy to set them up, communities of practice that work well give a high return on the investment of time.

This blog is excerpted from "Learning to Learn" by Ryan Howes. The full version is available in the January/February 2012 issue, Are Parents Obsolete?: Confronting the Dilemmas of 21st Century Childrearing.