Is Virtual Reality a Game Changer?

VR is Therapeutic. But Could It Change Therapy as We Know It? 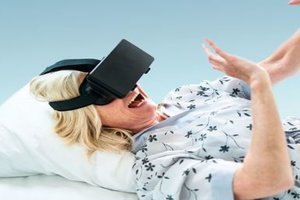 Whoa, what’s going on here? Where am I? What is this?” Joe exclaimed. “Where are my hands and my feet? Wow, this is fantastic!” Friends since our teenage years, I knew Joe had a tendency to be enthusiastic, but this reaction was really something. I’d given him options: Caribbean sunsets, the Alaskan shore, even a tour of Paris, but he chose to explore the stark and awe-inspiring American Southwest. For the next few moments, he stood in my living room, looking, laughing, and vocalizing sounds of amazement as he took in the different scenes. Of the 50 or so friends, coworkers, and clients whom I’ve watched try on my virtual reality (VR) gear and step into one of the 360-degree photos, Joe was the most effusive. Still, the others would agree that their introduction to VR was quite a memorable experience.

Of course, VR has been around since the 1980s, when Jaron Lanier, one of its initial theoreticians and developers, coined the term. VR sets have been used in therapeutic research for treatment of phobias since the mid-1990s, but they’ve only now started to enter the consumer market. Why? Well, it’s largely due to cell phones becoming so ubiquitous and inexpensive. With their high-resolution screens, small built-in cameras, and motion detectors, the production of billions of cellphone devices dramatically reduced the cost of the key components required for VR equipment. In fact, Lanier estimates that back in 1990, it would’ve cost a million dollars to buy a VR set that could match what even low-end products can offer today.

That’s a million bucks for the equivalent of my $100 Samsung VR Gear headset and $700 phone. Even better, I actually got the headset for free as part of the package for preordering my Galaxy 7. Talk about a deal! Samsung produced this fairly inexpensive set through a partnership with Oculus, the company launched from a 2012 Kickstarter campaign by Palmer Luckey, a former University of Southern California (USC) researcher. Two years later, the startup was bought by Facebook for $2 billion, and in April of this year, accompanied with great fanfare in the tech world, it released the Oculus Rift headset for $599. While the Facebook purchase gave Oculus loads of press, there’s a lot of competition in this emerging market. Google Cardboard, HTC’s Vive, and Sony’s PlayStation are just a few of the emerging products vying for consumer attention. With major film and gaming companies working to develop VR content, it’s easy to understand why the market is predicted to top $80 billion within 10 years.

VR challenges some of our physical and emotional boundaries, altering our immediate experience of what’s real and blurring our sense of being separate from what we’re watching. Put on your VR goggles and headphones and you enter a new environment, experienced from a first-person, 360-degree perspective. Like real life, when you turn your head to the right or look up, the sights you see and sounds you hear are different than when you look down or turn toward your left. While you know you’re wearing goggles and headphones, you feel as if you’ve been transported into some other world. It’s immediate and immersive. Whether it’s the center of Beijing, the top of the Matterhorn, the bottom of an animated sea, or alongside refugees fleeing Syria, you experience the moment as if you’re there. And while the popular use of VR has so far been relatively limited, researchers have already been tapping into this powerful sense of immersion to pioneer various types of VR-based therapies.

VR in the Therapy Room

Since the mid-1990s, Virtually Better Inc., an Atlanta-based company, has used VR exposure therapy to treat a variety of phobias. While its initial setups required extensive and expensive hardware, it’s recently begun recoding its software to run on iPhones, allowing me the opportunity to test out Fear of Flying and Fear of Storms, two of the most popular modules it sells to therapists looking to incorporate this technology into their practice.

First, the iPhone is placed within a headset worn by the client, while the therapist views the control panel on a computer. As the program starts up, the client is placed within an animated scene—for example, standing by the airport gate during preboarding. In addition to visual stimuli, the therapist can add sound effects such as background chatter, airport announcements, and other ambient sounds to enhance the simulation. Clients use a handheld device to control movement; they can walk down the boarding ramp to enter the plane or remain at the gate until they feel prepared, which might take several sessions. Once seated in the plane, they can no longer use the controller to move around, but must remain seemingly strapped in as they prepare to fly. As with other types of exposure therapies, clinicians will periodically check in with clients and ask them to rate their level of distress, suggest strategies to reduce anxiety, and encourage them to proceed. Clients can experience taxiing down the runway, liftoff, flight (including sounds of turbulence), and landing. It’s quite a ride!

Virtually Better has developed programs that address fears of storms, spiders, heights, and public speaking. They’ve also developed a module that can assist people dealing with substance abuse to confront common triggers. Imagine being at a virtual bar, with booze in the background and a pack of cigarettes on the counter. The company also provides support to military and VA hospitals using a highly effective VR product specifically developed to treat service personnel suffering from PTSD.

With major funding from the Department of Defense, VR programs Virtual Iraq/Afghanistan and BRAVEMIND were developed at the University of Southern California Institute of Creative Technology for work with combat vets. These programs include immersive scenarios of Middle Eastern urban, village, and road environments. Clients are presented visual stimuli through a VR head-mounted display with the imagery enhanced by directional 3D audio, vibrations, and smells.

Other clinicians and researchers have explored VR’s potential as a platform to assist children with autism learn social skills, to provide life-skill training for children or adults with cognitive disabilities, and as a learning tool for people recovering from brain injuries. Also, a VR program called SnowWorld, developed by scientists at the University of Washington, which places patients in an immersive snowy environment, has been shown to help burn victims and others receiving wound care better manage their pain. Indeed, Howard Rose, cofounder of DeepStream VR, a health-focused VR company, believes the technology has great potential for many people who experience chronic pain.

Rose believes that some of the power of VR for pain relief comes from disrupting the body map and breaking the cycle of pain that can lead to persistent suffering. His company’s new product, Glow, allows people to experience themselves being outside on a summer evening, with fireflies flickering in the background. A biosensor measures their heart rate, and as the rate slows down, reflecting a more relaxed state, their hand starts to glow and attract the fireflies. As long as they stay relaxed, the warm glow continues and they can gather the flickering lights to fill lanterns and expand the effect. “It’s one of those Oh Wow! experiences,” he says. “Although it might seem somewhat ironic, we feel this type of VR technology can enhance a person’s ability to relax and apply mindfulness techniques to ease both pain and suffering.”

An important concept in VR is something called embodiment, the process through which people can associate themselves with a virtual body within the VR environment that they see from a first-person perspective. It’s achieved by having them don VR glasses and body sensors while the system records their exact movements as they speak and react. These movements can then be simulated within the VR environment by an animated character, known as an avatar, that individuals experience as being themselves, even if it doesn’t look like them.

An experiment called “Freud-Me,” recently done at the Experimental Virtual Environments (EVENT) Lab for Neuroscience and Technology in Barcelona, explored an interesting twist on this concept. Participants (all males) were placed within a VR setting and embodied in an avatar of themselves. Next, they were embodied in a VR representation of Sigmund Freud. In what might be conceived of as the Gestalt empty-chair technique on steroids, each participant was able to enact and view himself from both sides of the role-play. The interaction began with the participant embodied in the avatar that looked like himself explaining a real problem he was facing to the Freud avatar. Then embodied as Freud, the participant was instructed to listen to and offer the best advice he could. The response was recorded, and then once again embodied in his own virtual persona, the participant listened to and watched the famous psychologist respond to his dilemma. (The vocal pitch was lowered when Freud spoke, so it sounded a bit different from the participant’s and gave it a tone of authority.) Using the asynchronicity of the exchange, an individual could choose to repeat a specific interaction or simply continue the back-and-forth exchange, along with the process of body switching until he decided to stop.

Although not clinically tested, the results were promising. It seems that having Freud respond increased both the receptivity and confidence participants felt in trying alternate strategies to meet the challenges they’d described. In a sense, the experiment created a technologically enhanced self-help technique, through which one might take an internal dialogue between different parts of the self and externalize it to more effectively help resolve a personal problem.

Beyond the more obvious political implications, as the systems become increasingly sophisticated, vast quantities of personal user data including eye movements, facial gestures, and motor responses will be collected, thereby allowing private agencies to acquire details about one’s interests and preferences in hitherto untapped ways. Some posit that sophisticated techniques might allow marketers to manipulate consumers “by real-time feedback of their avatar’s own facial and eye movements” to sell products or produce changes in users’ mental mechanisms themselves. Furthermore, recognizing that one’s kinematics (physical movements) may be uniquely connected with one’s identity (a new type of “fingerprint”), the collection of intimate data adds a new level to the effects that technology will have on privacy-related issues.

Gazing into the Crystal Ball

Let’s circle back to the impact of VR in the therapy room and upon our profession in general. Is VR really a game changer? Here we are again at the dawn of another new, potentially highly disruptive technology that will profoundly influence us in ways we can only begin to conceptualize. After a history of false starts and overly optimistic timeframes, VR is finally moving into the mainstream, with low-cost consumer products becoming readily available. Most of us can stay away from VR at this point, but I wonder if by choosing to gain familiarity with it instead, we can understand and adapt to the profound societal and professional implications it’ll bring.

This blog is excerpted from "Is VR a Game Changer?" by Michael Greene. The full version is available in the November/December 2016 issue, The Next Big Thing: Psychotherapy and the Virtual Revolution.