The Paradox of Acceptance

Richard Schwartz Shares What Wise Buddhists Have Known for Centuries 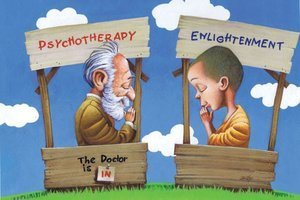 I loved this article as it is a wonderful reminder to "calm our parts" both with clients, and throughout our own personal lives. As a counselor who has had recent positive results as a recipient/client of IFS, the article shares good and realistic suggestions of how to carry it into our own worlds. What a great word, "Tor-Mentors" to describe how clients mentor us, by making us aware of what parts need our (loving) attention. This will stay with me. I recently woke up on the morning of a clinical job interview feeling fearful, with several negative thoughts, even considering not going. Instead of absorbing the fear, with some quiet practice time, I was able to calmly 'notice' and 'observe' it, vs. feeling overwhelmingly held by it. Here is what happened next: I arrived early and chatted pleasantly with the office manager, the interview went very smoothly; and significantly, I felt more accepting and less judgmental of myself. And, oh, btw, I got the job :).