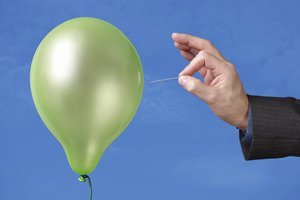 I approached my chance to interview Martin Seligman in May 2007 with some trepidation. Only three months earlier I had published an essay in Harper's critical of both positive psychology and pop positive thinking. Sure enough, when I first encountered Seligman he was practically scowling. "There he is!" the security guard at the reception desk in a boxlike building at the University of Pennsylvania said, pointing upward to a short, solid, bullet-headed man looking down from the second-floor balcony. I smiled and waved, to which Seligman responded only, "You'll have to take the elevator."

It was impossible not to dwell on the fact that Seligman's early work, before he announced the launching of positive psychology, had been about "learned helplessness," showing that when dogs are tormented in random ways they become passive, depressed, and unable to defend themselves.

I attempted to carry on a conversation about his book Authentic Happiness, which I had found just as elusive as he was turning out to be. Like most lay books on positive thinking, it's a jumble of anecdotes (primarily autobiographical in Seligman's case), references to philosophers and religious texts, and tests you can take to assess your progress toward a happier and healthier mind-set. Only on a second reading did I begin to discern a progression of thoughts—not a logical progression but at least a kind of arc. He begins with what positive psychologists call their field's "origin story," about how he was weeding his garden one day when his five-year-old daughter challenged him to stop being such a "grouch." Grouchiness, he realizes, is endemic to the academic world: "I have noticed over thirty years of psychology department faculty meetings—conducted in a cheerless, gray, and windowless room full of unrepentant grouches—that the ambient mood is on the chilly side of zero." Prodded by his daughter, he decides that "it was worth trying hard to put more positive emotion into my life," and a veritable candy land of pleasures begins to open up, epitomized by "a cloudless spring day, the ending of the Beatles' ‘Hey Jude,' pictures of babies and young lambs, and sitting down in front of a blazing fire on a snowy evening."

But just as he seems to be on the verge of embracing hedonism, or at least a kitschy version thereof, he pulls back sharply in a burst of Calvinist disgust, enjoining the reader to "strive for more gratifications, while toning down the pursuit of pleasure."

Abandoning the positive emotions, Seligman's book goes off in search of character," which he admits is a Calvinist-sounding concept—"nineteenth-century Protestant, constipated, and Victorian." To get to the roots of character, he and his colleagues sift through two hundred "virtue catalogs"—including Aristotle and Plato, Augustine and Aquinas, the Old Testament, Confucius, Buddha, and Benjamin Franklin—out of which they distill "six virtues": wisdom and knowledge, courage, love and humanity, justice, temperance, spirituality and transcendence. I told him that he had lost me at this point in his book. Courage, for example, could take one very far from the "positive emotions," with their predicted positive effects on health and success, and into dangerous and painful situations, just as spirituality could lead to social withdrawal, fasting, and self-mortification. In fact, I blathered on, the conventional notion of "character" seems to include the capacity for self-denial, even suffering, in pursuit of a higher goal. To my surprise, he deflected the implicit criticism onto his erstwhile collaborator, Ed Diener, saying that Diener is "all about the smiley face" and just "trying to make people feel better," whereas he, Seligman, is concerned with "meaning and purpose."

Loyalty, I recall, did not make it onto the list of virtues.

Referring to his Authentic Happiness Inventory, I remarked that many of the survey questions seemed a bit arbitrary, leading him to snap, "That's a cheap shot and shows your failure to understand test development. It doesn't matter what the questions are so long as they have predictive value. It could be a question about butterscotch ice cream and whether you like it. The issue is how well it predicts." Well, no. First you come up with a test that seems to measure happiness as generally defined, and then you can look for things that happiness seems to correlate with, such as liking butterscotch ice cream. But you cannot fold the ice cream into the definition of happiness itself.

The central claim of positive psychology, as of positive thinking generally, is that happiness—or optimism, positive emotions, positive affect, or positive something—is not only desirable in and of itself but actually useful, leading to better health and greater success. One book on positive psychology states that "happiness . . . is more than pleasant, it is beneficial," and Seligman begins Authentic Happiness by summarizing a few studies showing that happy (or positive) people live longer than unhappy ones. In other words, you should make an effort to be happy, if only because the consequences of unhappiness may include poor health and lower achievement. Would happiness stop being an appealing goal if it turned out to be associated with illness and failure? Isn't it possible to imagine being gloriously contented with a life spent indulging unhealthy habits, like the proverbially happy "pigs in shit"? Nothing underscores the lingering Calvinism of positive psychology more than this need to put happiness to work—as a means to health and achievement, or what the positive thinkers call "success."

Happy, or positive, people—however that is measured—do seem to be more successful at work. They are more likely to get a second interview while job hunting, get positive evaluations from superiors, resist burnout, and advance up the career ladder. But this probably reflects little more than the corporate bias in favor of a positive attitude and against "negative" people.

When it comes to the proposed health benefits of a positive outlook, the positive psychologists would seem to be on firmer ground. A positive outlook cannot cure cancer, but in the case of more common complaints, we tend to suspect that people who are melancholy, who complain a lot, or who ruminate obsessively about every fleeting symptom may in fact be making themselves sick. When John E. Sarno, a professor of rehabilitation medicine, published a book proposing that lower back pain was caused by repressed anger rather than a physical abnormality and that it was curable by mental exercises, thousands testified that they were helped, including the well-known health guru Andrew Weil.

But the results that go out to the public through the media tend to be spun toward the positive effects of positive emotions on health. Partly, this represents a long-standing media bias away from "null results": a study finding, for example, that there is no sex difference in the ability to sprint or solve quadratic equations is likely to be judged less newsworthy than a study reporting that one sex left the other in the dust. In the case of positive psychology, a 2002 New York Times article cited two studies linking optimism to longevity—and four studies tracing longevity to such other traits as "conscientiousness," calmness, pessimism, and even cantankerousness. Yet the article was headlined "Power of Positive Thinking Extends, It Seems, to Aging."

The next time I met Martin Seligman he was unexpectedly friendly and ¬welcoming. The setting was the Sixth International Positive Psychology Summit, held in the majestic Gallup Organization building in downtown D.C.

At the time of the "summit" meeting, in October 2007, positive psychology had a lot to celebrate. It was gaining ground at all levels in academia, with more than two hundred colleges and graduate schools offering courses in positive psychology, sometimes dubbed "Happiness 101," in which students reflected on their happier moments and engaged in exercises like writing "gratitude letters" to people in their lives.

However, the publicity received by positive psychology in the preceding year had been less than 100 percent positive. The 2007 New York Times Magazine article on Happiness 101 courses had complained about "the sect-like feel of positive psychology" and suggested that "the publicity about the field has gotten ahead of the science, which may be no good anyway." The article went on to report that "the idea that whatever science there is may not yet be first-class troubles Seligman, too. ‘I have the same worry they do. That's what I do at 4 in the morning,' he says."

These worries finally surfaced at a late afternoon plenary session on "The Future of Positive Psychology," featuring the patriarchs of the discipline, Martin Seligman and Ed Diener. Seligman got the audience's attention by starting off with the statement "I've decided my theory of positive psychology is completely wrong." Why? Because it's about happiness, which is "scientifically unwieldy." Somehow, this problem could be corrected by throwing in the notions of "success" and "accomplishment"—which I couldn't help noting would put the positive psychologists on the same terrain as Norman Vincent Peale and any number of success gurus. With the addition of success, Seligman went on, one was talking no longer about positive psychology but about a "plural theory" embracing anthropology, political science, and economics, and this is what he would be moving on to—"positive social science."

Seligman's statement created understandable consternation within the audience of several hundred positive psychologists, graduate students, and coaches. It must have felt a bit like having one's father announce that he found his current family too narrow and limiting and would be moving on to a new one. In the Q&A session, some picked up on Seligman's admission that the scientific basis of positive psychology is all too thin, with one asking, "How do we balance the empirical side of positive psychology with the applied stuff," like coaching? Diener responded, in part, that "people doing things that there isn't good evidence for" are at least "meeting a need." Seligman agreed, saying that positive psychology was under pressure to produce practical results because "people want happiness." If that sometimes means that the applications, like coaching, get ahead of the science—well, "science follows from practice," he said, invoking the Wright brothers, "who flew when scientists didn't know how birds fly."

The idea of moving on to "positive social science" provoked even more anxiety. Diener defended the phrase "positive psychology," saying, "It's a brand." Besides, he said, he "hates" the idea of positive social science, since social science includes sociology and sociology is "weak" and notoriously underfunded. The subject seemed to have veered away from science to naked opportunism. When one audience member proposed renaming positive psychology "applied behavioral economics," because "it's popular in business schools and goes with high salaries," nobody laughed.

This blog is excerpted from "Bright-Sided" by Barbara Ehrenreich. The full version is available in the March/April 2010 issue, Haunted: The Growing Debate Over the Legacy of Trauma.

Read more FREE articles like this on Positive Psychology.

Despite Ehrenreich's "Bright-Sided", and a thorough debunking of the positive psychology- capitalism success connection, we continue to have well known writers like Oliver Sacks, whose work I liked immensely, writing books like his "Gratitude", which easily confused gratitude with something positive psychology espouses as an antidote to depression during terminal illness, and this, in my view, is not helpful. Ehrenreich certainly knows this from personal experience.