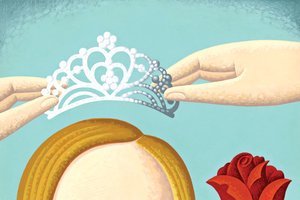 My daughter is beautiful: she has long, flowing, blonde hair, blue eyes, elegant features, and stands about 5’ 10” tall. These are not simply the proud rantings of an adoring father: she’s often asked by others if she’s a model. She might reply, “Model? Who’s he?” or simply yell, “Model!” delighted by the sound of the word but unable to answer the question since she’s autistic and has difficulty with everyday interactions and expressing herself coherently.

There have been numerous occasions when young men, clearly attracted to her, have approached her to talk, and blankly turned away upon discovering her cognitive deficits. My heart has sunk on more than one occasion as I’ve grappled with the urge to explain her to them, to let them know how warm and real she is, and how they’re missing out on a wonderful opportunity to know a great person. Instead, I move to comfort her, as I recognize that her not looking like a teen with special needs can sometimes make her life a notch more difficult than it would be otherwise.

There are other awkward moments when the world doesn’t seem to know what to make of Kendall. For instance, since she has a penchant for darting off in busy parking lots, we acquired a handicap tag to make it easier to reduce the distance to building entrances. Once, as we were backing out from a handicap space, an irate woman confronted me, screaming, “Why are you using this spot?!”

I replied, gesturing toward my daughter, “Ask her.” Kendall smiled sweetly and said, “Spot.” The lady left quickly, with appropriate contrition.

These are some of the challenges we face. Blessedly, Kendall seems oblivious to them, most of the time, although she does have moments when she appears to be aware of her limitations and simply cries for seemingly no reason. Those moments have been among the hardest for me, when I’ve seen her lost in her own emotion and confused by her own thoughts. As a dad, all I can do is hold her and comfort her.

She’s the kind of kid I might never have known growing up in the ’60s. Girls and boys like her were sent away to institutions or were protected at home, kept out of sight from “normal” kids. With the advent of special-needs programming and the adoption of individualized education plans, school systems today provide much more support than they used to. So for the past 14 years, Kendall has been going to school every day, albeit in a special-needs class. She’s now 18, a senior, and this June will be her graduation. It’s a prospect I greet with mixed emotions. I’ll be happy for her, but I’ll miss some of the simple rituals we’ve shared as part of her school experience, like linking arms as we walk down the driveway to wait for her bus to come. Each morning, she asks the same questions: “You goin’ to work? Mommy stays home?” The answers are always the same, allowing her to ease any apprehensions she may have and enjoy her day. Then, when we spot her bus, l say, “Whose bus is that?” She answers with glee, “It’s my bus!”

I’ve never been the kind of father who needs his children to be Rhodes scholars or star athletes. I’ve merely hoped that they be healthy and fulfilled. My son, a liver transplant recipient, has managed to be relatively healthy despite numerous challenges; our sweet Kendall brings us fulfillment every day, which we hope reflects her inner satisfaction. At the same time, I’ve also longed for her to be able to forge more relationships outside our family, perhaps even meet a Prince Charming of sorts. Of course, no one could love her as much as I do, but I’m struck by how many people appreciate the quality of simple, joyful love she conveys. She has a gift for bringing gladness into the world, and my biggest hope for her would be for that to continue unabated, even after I’m gone.

Recently, we had a small birthday bash when I turned 60. It was a lovely late spring day, and several of our friends were out on our deck. Suddenly, two police officers appeared in the backyard. I remember thinking, Hey, not bad for an old fart! We can still bring the cops to quiet a party! Turns out, my enthusiasm was unwarranted: one of our guests had butt-dialed 911. But as they were standing in the yard, the officers called out with a beaming grin, “Hi, Kendall!” She looked down, nodding with a shy smile, and said, “Hi!” They knew her from the DARE program they’d conducted several months earlier at her school. Not many parents of teenagers would say they’re proud their child is known to the police, but I was.

Similar scenarios occur in public places quite frequently. Cashiers at Target (where she and I go every Sunday morning) or school acquaintances wandering the mall will call out, “Hi, Kendall!” They all seem to genuinely like her, but a parent of a special-needs child always wonders at the authenticity of it all. Are they just being nice? Do they simply pity her? It’s so hard to tell when our energy is so often directed toward helping her. My wife, in particular, is a tireless caregiver, who attends to Kendall’s every need, helps her with routines like showering, hygiene, and getting dressed for the day, ferrying her from place to place and providing stimulating extracurricular activities like therapeutic horseback riding and special-needs bowling. By the way, Kendall’s a pretty darned good bowler, who can easily beat most of her therapists.

But day after day, we are reminded of just how different Kendall is from the others. True independence is out of the question: no driving, no hanging out with friends after school. She’s our perpetual 3-year-old. She loves to watch TV or stream YouTube videos; her favorites are Barney and Friends, Blues Clues, and The Wiggles. But rather than sitting passively, she makes watching TV an aerobic activity as she bounds around the room, bobbing her head with arms outstretched, mimicking the kids in Barney’s gang and the Wiggles’ dance routines. She loves all kinds of movies, especially those with music she can dance to, which some might consider inappropriate for a “3-year-old,” but sometimes the 18-year-old hormones cut through the mix. High Fidelity with John Cusack is one such movie, which she discovered because it’s a favorite in our household. Every time she sees it, she pauses at the love scenes, watching them over and over, her gaze fixed on the couple. I wish I knew what she could be thinking at those moments.

Since her communication abilities are so limited, social events at school are problematic for her to attend without supervision or assistance. Even among the special-needs group, her inability to communicate effectively separates her from those who have better verbal skills. So in the winter of her junior year, even though the prom was just around the corner, we never imagined she’d go, and there were no plans for any kind of alternative event for the special-needs class. Despite my wife’s efforts to arrange one, the logistics and expenses proved difficult to surmount. And even if we could, an alternative event would reinforce the difference between mainstream and special-needs kids. Most of the parents, us included, pretty much gave up on the alternative prom idea.

But one night the phone rang, and on the line was the mother of Mark, a fellow special-needs friend, who’s quite a bit more functional than Kendall and was able to be mainstreamed into the junior class. In halting tones, she asked, “Would Kendall like to go to the prom with Mark?”

Thinking she meant the alternative special-needs event, my wife replied, “Well, we don’t think that seems to be in the cards.”

“No, I mean the real prom,” she said. “I think it’d be great for the two of them to go. They like each other.”

My wife gasped. “This is just so wonderful,” she responded. “We never thought our girl would get asked to the prom! Thank you so much!”

Plans were immediately put in place for the two moms to drive down together to offer additional supervision at the event. But with prom still several weeks away, we left soon after with Kendall in tow for our annual spring vacation in Florida. As we settled into our condo and my wife sat down to check her email, she started screaming, “Oh my God! Oh my God!” I felt sick, expecting the worst. As the father of two children with ample challenges, I never know what to expect, but Julie held up her laptop to show me a message from the school: Congratulations, Kendall! You’ve been elected to Prom Court! You and 11 other girls will receive roses at the beginning of the prom. The roses will all be wrapped; all but one are white. The girl who receives the one red rose will be this year’s prom queen. As tears of gratitude began to fill my eyes, I thought, Wow, things really have changed since I was in school.

The day of the prom there was still much preparation to be done, or so I was told. (Being a guy, most of these things remain mysterious to me.) A stylist came to our home to do her hair and makeup, and Kendall reveled in all the attention, announcing with pride, “I’m so pretty!” The more unexpected development was that our son was quite ill, and I had to accompany him to the urgent care center—which occupied a large portion of the day. By the time I’d gotten home, it was nearly time for Mark and Kendall to leave with their entourage of my wife, Mark’s mom, and our favorite therapist in tow.

Kendall was clearly nervous, but she picked up on our excitement, and her anxiety dissipated as she stood close to Mark. I was drained from the day’s medical odyssey, but was glad to help Mark tie his tie, fasten his boutonnière, and learn a few hurried dance moves. They made a good-looking couple: Mark, at a strapping 6’ 2”, was physically a good choice for our tall, thin daughter, who was displaying a demure smile I hadn’t seen before. More importantly, they looked so radiantly happy. I can’t remember if I’ve ever been prouder.

Soon they were on their way, and I dozed off while keeping one eye on a basketball game on TV, my phone nestled on my chest. After an hour or so, I was startled awake by the vibration of a text alert. Through blurry eyes, I saw two words from my wife: Prom Queen! Within seconds, the school had posted a video to Instagram. There she was, my special daughter, surrounded by her court and hundreds of onlookers as the girls unwrapped their roses. She ripped open the wrapper, and upon seeing the red rose, beamed and held it high over her head in triumph, clearly grasping the moment. The crowd erupted in a raucous cheer as the previous year’s queen placed a crown on Kendall’s head. I played that video so many times that night I lost count. I’ve played it many more times since, and I still have the same reaction: moved to tears with love for every one of those generous kids who made her queen, giving Kendall—and us—a moment to feel far more special than special.

This blog is excerpted from "Kendall's Prom" by Richard Holloway. The full version is available in the July/August 2016 issue, OCD: Is There Any Way to Turn It Off?

This is a beautiful , very well written, moving story, but much more: it´s the courageous, loving witness of a commited family . Congratulations,o